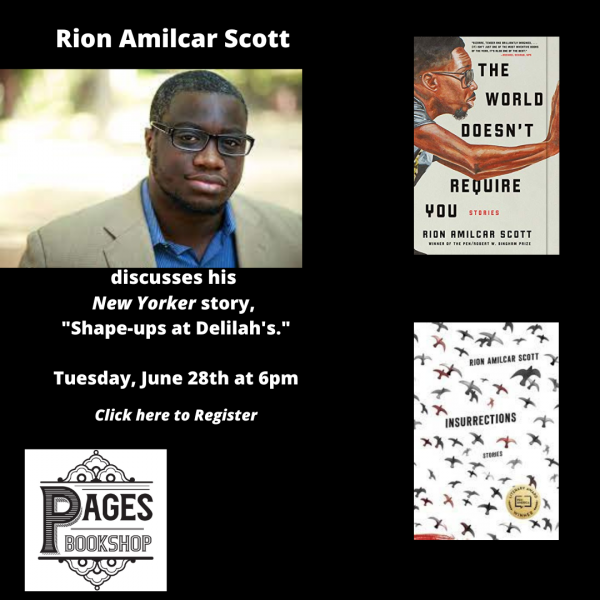 VIRTUAL EVENT: Rion Amilcar Scott will discuss his short story, Shape-ups at Delilah's. He will also take questions from the audience about his award-winning collection The World Doesn't Require You. To be prepared for the discussion, please read the story beforehand at: https://www.newyorker.com/magazine/2019/10/07/shape-ups-at-delilahs.

Register in advance for this Zoom meeting HERE.

After registering, you will receive a confirmation email containing information about joining the meeting.

The World Doesn't Require You announces the arrival of a generational talent, as Rion Amilcar Scott shatters rigid genre lines to explore larger themes of religion, violence, and love - all told with sly humor and a dash of magical realism.

Established by the leaders of the country's only successful slave revolt in the mid-19th century, Cross River still evokes the fierce rhythms of its founding. In lyrical prose and singular dialect, a saga beats forward that echoes the fables carried down for generations - like the screecher birds who swoop down for their periodic sacrifice, and the water women who lure men to wet deaths.

Among its residents - wildly spanning decades, perspectives, and species - are David Sherman, a struggling musician who just happens to be God's last son; Tyrone, a ruthless PhD candidate, whose dissertation about a childhood game ignites mayhem in the neighboring, once-segregated town of Port Yooga; and Jim, an all-too-obedient robot who serves his Master. As the book builds to its finish with Special Topics in Loneliness Studies, a fully-realized novella, two unhinged professors grapple with hugely different ambitions, and the listener comes to appreciate the intricacy of the world Scott has created - one where fantasy and reality are eternally at war.

Rion Amilcar Scott is the author of the story collection, The World Doesn’t Require You (Norton/Liveright, August 2019), a finalist for the PEN/Jean Stein Book Award and winner of the 2020 Towson Prize for Literature. His debut story collection, Insurrections (University Press of Kentucky, 2016), was awarded the 2017 PEN/Bingham Prize for Debut Fiction and the 2017 Hillsdale Award from the Fellowship of Southern Writers. His work has been published in places such as The New Yorker, The Kenyon Review, Crab Orchard Review, Best Small Fictions 2020 and The Rumpus, among others. His story, “Shape-ups at Delilah’s” was published in Best American Science Fiction and Fantasy 2020. He was raised in Silver Spring, Maryland and earned an MFA from George Mason University where he won the Mary Roberts Rinehart award, a Completion Fellowship and an Alumni Exemplar Award. He has received fellowships from Bread Loaf Writing Conference, Kimbilio and the Colgate Writing Conference as well as a 2019 Maryland Individual Artist Award. Presently he teaches Creative Writing at the University of Maryland.