Virtual Brunch + Book Club: Everything is Under Control 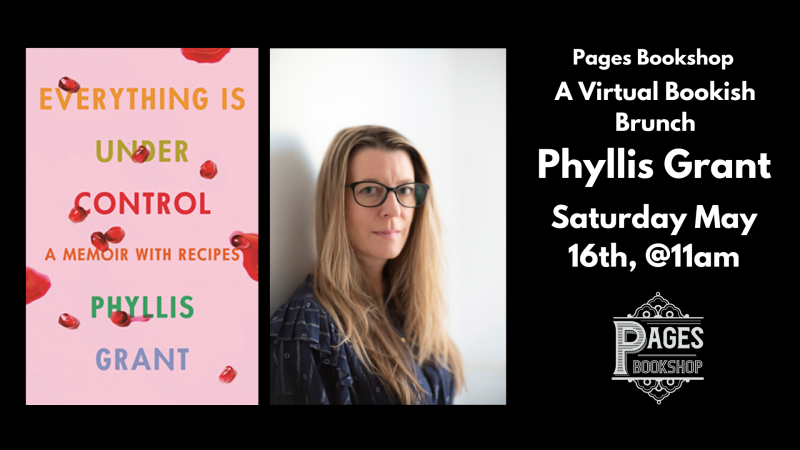 Join us for a bookish brunch on Saturday, May 16 featuring Everything is Under Control: a memoir with recipes by Phyllis Grant.

Let's gather around a - virtual - table together and chat about this new release. Everything is Under Control is a series of vignettes followed by tried-and-true recipes from Grant’s table―a heartrending yet unsentimental portrait of the highs and lows of young adulthood, motherhood, and a life in the kitchen. One of Esquire's 10 Best Cookbooks of 2020 (So Far)!

We will have more information shortly on what platform we will be using to host so please make sure to confirm your spot in order to get updates.

About Everything is Under Control

A memoir about appetite as it comes, goes, and refocuses its object of desire. Grant’s story follows the sometimes smooth, sometimes jagged, always revealing contours of her life: from her days as a dancer struggling to find her place at Juilliard, to her experiences in and out of four-star kitchens in New York City, to falling in love with her future husband and leaving the city after 9/11 for California, where her children are born. All the while, a sense of longing pulses in each stage as she moves through the headspace of a young woman longing to be sustained by a city into that of a mother now sustaining a family herself.

PHYLLIS GRANT is an IACP finalist for Personal Essays/Memoir Writing and a three-time Saveur Food Blog Award finalist for her blog, Dash and Bella. She has cooked in world-renowned restaurants, including Nobu, Michael’s, and Bouley. Her essays and recipes have been published in a dozen anthologies and cookbooks, including Best Food Writing in both 2015 and 2016. Her work has been featured in Esquire, O, The Oprah Magazine, The New York Times, Real Simple, Saveur, HuffPost, Time, San Francisco Chronicle, Food52, and Salon. She lives in Berkeley, California, with her husband and two children.

Everything Is Under Control: A Memoir with Recipes (Hardcover)