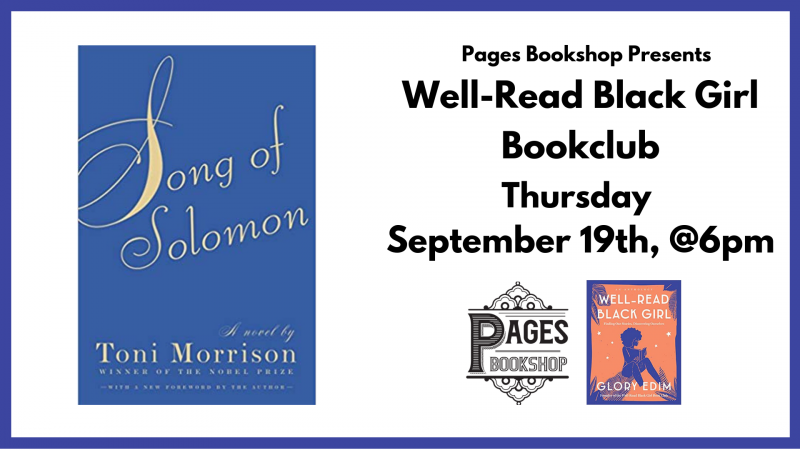 Due to the success and enthusiasm around our newest book club, we have decided to make it a monthly meeting. This next month's Well-Read Black Girl book club will meet on Thursday, September 19th at 6pm.

This book club is free and open to the public. Purchase your copy at Pages and get 15% off.

It will be hosted by a friend of the store and avid reader Dawn Sarai Robinson. Books for Dawn have been a lens to help her give voice to her unique experiences as a woman of color and to see that she is not alone. She believes in the importance of building spaces of belonging and she can't wait to discuss the stories that meet at that intersection of gender and race.

This month we are reading "Song of Solomon" by Toni Morrison. Whether you have just started the book or read it a long time ago, all are welcome to come and join in the book club.

So What is Well-Read Black Girl Bookclub?

This book club was originally started in 2017 by the author of "Well-Read Black Girl", Glory Edim as a Brooklyn-based book club and online community celebrating the uniqueness of Black literature and sisterhood. This year the American Booksellers Association partnered with Glory to take her book club to independent bookstores nationwide with the goal of amplifying diverse voices and supporting emerging writers of color.

About Song of Solomon:

Milkman Dead was born shortly after a neighborhood eccentric hurled himself off a rooftop in a vain attempt at flight. For the rest of his life he, too, will be trying to fly. With this brilliantly imagined novel, Toni Morrison transfigures the coming-of-age story as audaciously as Saul Bellow or Gabriel Garcia Marquez. As she follows Milkman from his rustbelt city to the place of his family's origins, Morrison introduces an entire cast of strivers and seeresses, liars and assassins, the inhabitants of a fully realized black world.

Praise for Song of Solomon:

A rich, full novel. . . . It lifts us up [and] impresses itself upon us like a love affair." -- The New York Times Book Review

"Exuberant. . . . An artistic vision that encompasses both a private and national heritage."

"Stunningly beautiful. . . . Full of magnificent people. . . . They are still haunting my house. I suspect they will be with me forever." --Anne Tyler, The Washington Post

"It places Toni Morrison in the front rank of contemporary American writers. She has written a novel that will endure." -- The Washington Post

"Lovely. . . . A delight, full of lyrical variety and allusiveness. . . . [An] exceptionally diverse novel." -- The Atlantic Monthly

"Morrison is a terrific storyteller. . . . Her writing evokes the joyful richness of life." -- Newsday