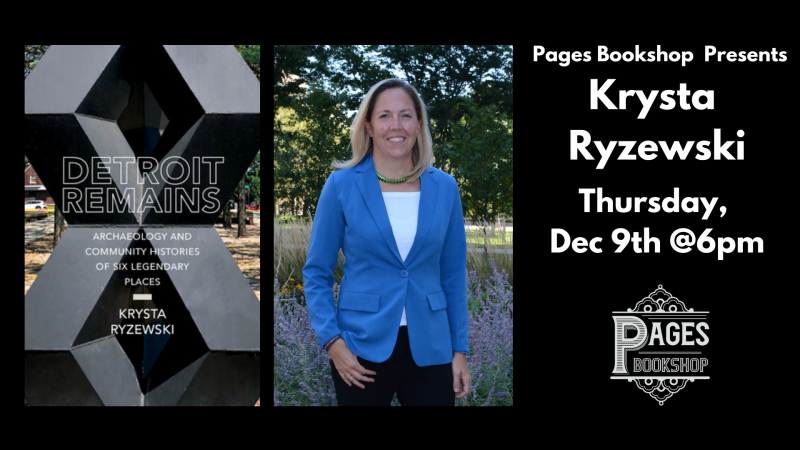 We are so excited to host Wayne State professor of anthropology, Krysta Ryzewski for her book "Detroit Remains", an archaeologically grounded history of six legendary places in Detroit.  This is the first historical archaeology book focused on Detroit!

Come join us on Thursday, December 9, at 6pm for a night of local history!

Mask will be required at all times during this event.

The city of Detroit has endured periods of unprecedented industrial growth, decline, and revitalization between the late nineteenth century and the present. In Detroit Remains: Archaeology and Community Histories of Six Legendary Places, Krysta Ryzewski presents six archaeological case studies of legendary Detroit institutions—Little Harry speakeasy, the Ransom Gillis house, the Blue Bird Inn, Gordon Park, the Grande Ballroom, and the Halleck Street log cabin—that trace the contours of the city’s underrepresented communities and their relationship to local currents of capitalism and social justice. Through a combination of rigorous historical archaeological research and narrative storytelling, Ryzewski deftly contextualizes the cases within the city’s current struggles, including recovery from bankruptcy, and future-oriented recovery efforts.

This is the first historical archaeology book focused on Detroit and one of the few to foreground the archaeology of the Great Migration era (ca. 1915–1970). The archaeological scholarship is rooted in collaborative, community-involved, and public-facing initiatives. The case studies examine how power is and has been exercised in Detroit’s communities over the past century: how it was stripped from the city’s twentieth- and twenty-first-century residents, but also how they acquired alternative sources of agency by establishing creative and illicit economies, most of which still operated within the city’s capitalist framework.

Throughout this book, connections run deep between archaeology, heritage, politics, historic preservation, and storytelling. Detroit Remains demonstrates how the city’s past, present, and future lie not in ruins but in the tangible archaeological traces of the everyday lives of Detroiters and their legacies.

KRYSTA RYZEWSKI is an associate professor of anthropology at Wayne State University. She is coauthor of An Archaeological History of Montserrat in the West Indies and coeditor of Contemporary Archaeology and the City: Creativity, Ruination, and Political Action.