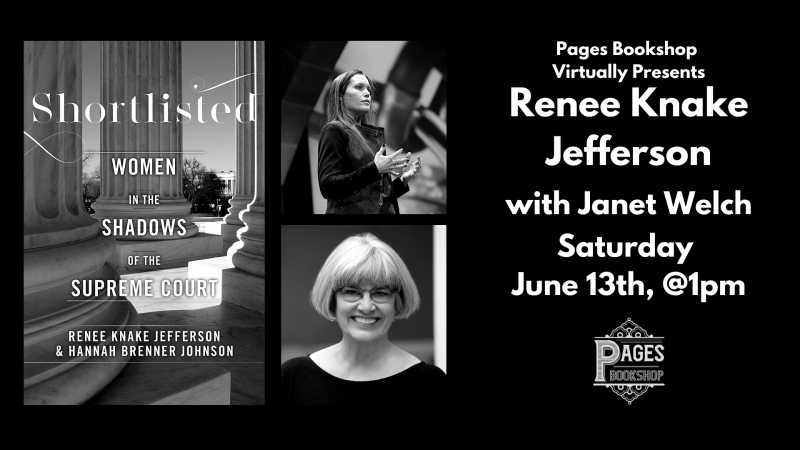 We are excited to host a virtual event for Renee Knake Jefferson for her latest book, "Shorlisted: Women in the Shadows of the Supreme Court" which tells the political and personal sagas of women publicly considered for appointment to the Supreme Court but never actually nominated by a president.

This book particularly timely as we celebrate the 100th anniversary of women’s suffrage this year. Renee will be joined by Janet Welch, the Executive Director of the State Bar of Michigan for what will surely be a stimulating conversation.

In 1981, after almost two centuries of exclusively male appointments, Sandra Day O'Connor became the first female Supreme Court Justice of the United States, a significant historical moment and a symbolic triumph for supporters of women's rights. Most do not know, however, about the remarkable women shortlisted for the Supreme Court in the decades before O'Connor's success.

Since the 1930s, nine women were formally considered for a seat on the Supreme Court, but were ultimately passed over. Shortlisted gives them the recognition they deserve. Award-winning scholars Renee Knake Jefferson and Hannah Brenner Johnson rely on previously unpublished materials to illustrate the professional and personal lives of these accomplished women. From Florence Allen, the first woman judge in Ohio, and the first to appear on a president's list for the Court, to Cornelia Kennedy, the first woman to serve as chief judge of a US district court, shortlisted by Ford and Reagan, Shortlisted shares the often overlooked stories of those who paved the way for women's representation throughout the legal profession and beyond.

In addition to filling a notable historical gap, the book exposes the harms of shortlisting―it reveals how adding qualified female candidates to a list but passing over them ultimately creates the appearance of diversity while preserving the status quo. With the stories of these nine exemplary women as a framework, Shortlisted offers all women a valuable set of strategies for upending the injustices that still endure. It is a must-read for those vying for positions of power as well as for those who select them.

RENEE KNAKE JEFFERSON is a law professor and an award-winning author whose work has been featured in BuzzFeed, CNN, National Public Radio, Slate, the Wall Street Journal, and other media. She holds the Doherty Chair in Legal Ethics at the University of Houston Law Center where she teaches ethics, constitutional law, and a writing seminar on gender, power, law, and leadership. On December 4, 2019, Governor Gretchen Whitmer appointed her to the Michigan State University Board of Trustees. A Fulbright recipient and elected member of the American Law Institute, she regularly consults on matters related to lawyer/judicial ethics, gender diversity in leadership roles, and the first amendment and lawyer speech.

Shortlisted: Women in the Shadows of the Supreme Court (Hardcover)