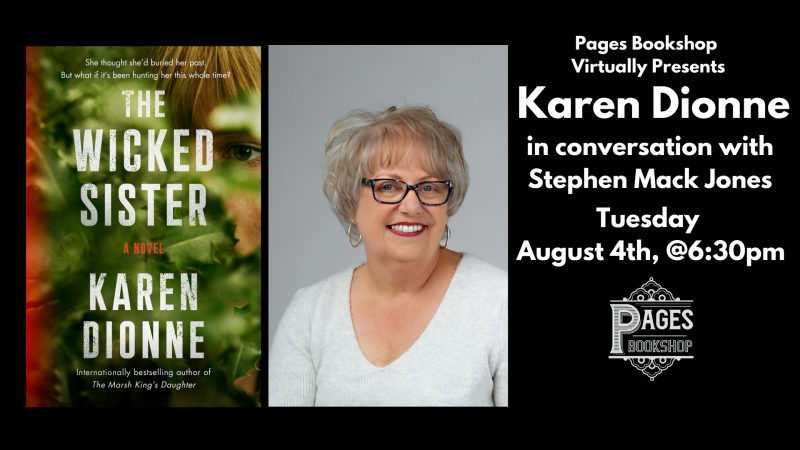 We are thrilled to virtually host, Metro-Detroit author, Karen Dionne for the launch of her new thriller "The Wicked Sister." Please join us in celebrating Karen's book launch and be the first to hear from the author herself about this book. If you liked her last book "The Marsh King's Daughter" you're sure to enjoy "The Wicked Sister."

Karen will be in conversation with Metro-Detroit based author Stephen Mack Jones, author of the August Snow Series.

You can pre-order "The Wicked Sister" here

About The Wicked Sister

She thought she'd buried her past. But what if it's been hunting her this whole time?

From the bestselling and award-winning author of The Marsh King's Daughter comes a startling novel of psychological suspense as two generations of sisters try to unravel their tangled relationships between nature and nurture, guilt and betrayal, love and evil.

You have been cut off from society for fifteen years, shut away in a mental hospital in self-imposed exile as punishment for the terrible thing you did when you were a child.

But what if nothing about your past is as it seems?

And if you didn't accidentally shoot and kill your mother, then whoever did is still out there. Waiting for you.

For a decade and a half, Rachel Cunningham has chosen to lock herself away in a psychiatric facility, tortured by gaps in her memory and the certainty that she is responsible for her parents' deaths. But when she learns new details about their murders, Rachel returns, in a quest for answers, to the place where she once felt safest: her family's sprawling log cabin in the remote forests of Michigan's Upper Peninsula.

As Rachel begins to uncover what really happened on the day her parents were murdered, she learns--as her mother did years earlier--that home can be a place of unspeakable evil, and that the bond she shares with her sister might be the most poisonous of all.

KAREN DIONNE is the USA Today and #1 internationally bestselling author of the award-winning psychological suspense novel The Marsh King's Daughter, published by G.P. Putnam's Sons in the U.S. and in 25 other countries. She enjoys nature photography and lives with her husband in Detroit's northern suburbs.