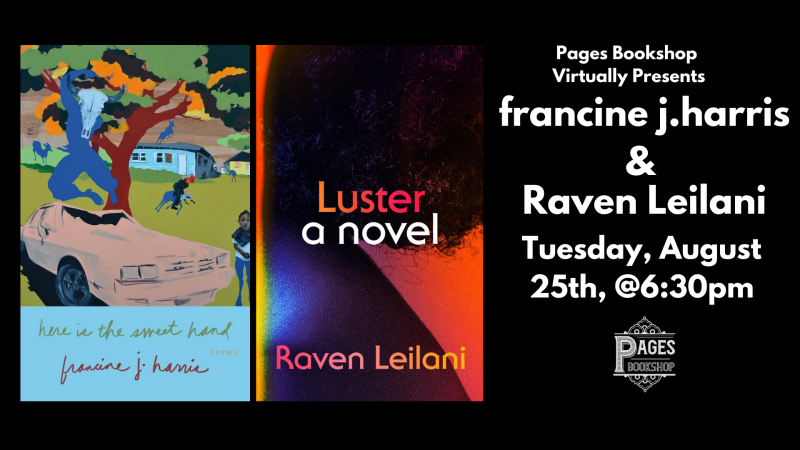 We are beyond excited to virtually host poet francine j harris and debut novelist, Raven Leilani for their newest books "Here is the Sweet Hand and "Luster."

Both francine and Raven's books come out on August 4, 2020! We cannot wait to hear what these incredible writers have to say to each other and learn more about their books and what it's like to have them come out now.

This conversation with be hosted on Crowdcast. You can register for the event here.

You can purchase your copy of "Here is the Sweet Hand" here.

You can purchase your copy of "Luster" here.

About Here is the Sweet Hand

The poems in Here is the Sweet Hand explore solitude as a way of seeing. In particular, the speakers in francine j. harris’ third collection explore the mystique, and myth, of female loneliness as it relates to blackness, aging, landscape and artistic tradition.

The speakers in these poems are often protagonists. Against the backdrop of numerous American cities and towns, and in a time of political uncertainty, they are heroines in their quest to find logic through their own sense of the world.

The poems here are interested in the power of observation. But if there is authority in the individual versus the collective, Here is the Sweet Hand also poses questions about the source of that power, or where it may lead.

As in her acclaimed previous collections, harris’ skillful use of imagery and experimentation with the boundaries of language set the stage for unorthodox election commemoration, subway panic, zoomorphism, and linguistic battlefields. From poems in dialogue with the artistry of Toni Morrison and Charles Burnett to poems that wrestle with the moods of Frank Stanford and Ty Dolla $ign, the speakers in this book signal a turn at once inward and opening.

FRANCINE J. HARRIS is the author of play dead, winner of the Lambda Literary and Audre Lorde Awards and a finalist for the Hurston/Wright Legacy Award. Her first collection, allegiance, was a finalist for the Kate Tufts Discovery and PEN Open Book Awards. Originally from Detroit, she has received fellowships from the National Endowment for the Arts, the MacDowell Colony, and the Cullman Center for Scholars and Writers at the New York Public Library. She is an associate professor of English at the University of Houston.

No one wants what no one wants.
And how do we even know what we want? How do we know we’re ready to take it?

Edie is stumbling her way through her twenties—sharing a subpar apartment in Bushwick, clocking in and out of her admin job, making a series of inappropriate sexual choices. She is also haltingly, fitfully giving heat and air to the art that simmers inside her. And then she meets Eric, a digital archivist with a family in New Jersey, including an autopsist wife who has agreed to an open marriage—with rules.

As if navigating the constantly shifting landscapes of contemporary sexual manners and racial politics weren’t hard enough, Edie finds herself unemployed and invited into Eric’s home—though not by Eric. She becomes a hesitant ally to his wife and a de facto role model to his adopted daughter. Edie may be the only Black woman young Akila knows.

Irresistibly unruly and strikingly beautiful, razor-sharp and slyly comic, sexually charged and utterly absorbing, Raven Leilani’s Luster is a portrait of a young woman trying to make sense of her life—her hunger, her anger—in a tumultuous era. It is also a haunting, aching description of how hard it is to believe in your own talent, and the unexpected influences that bring us into ourselves along the way.