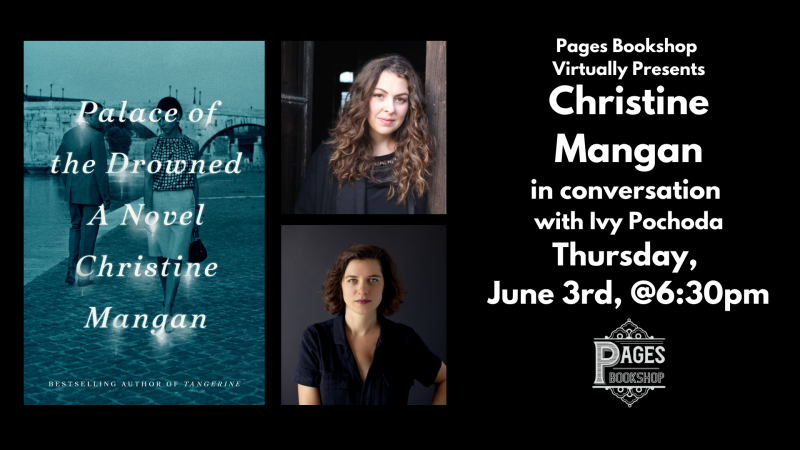 We are excited to be virtually hosting  author and Michigan native Christine Mangan for her second book, Palace of the Drowned. Christine's first book, Tangerine was popular with Pages' staff and customers alike and we have no doubt her new book will be a favorite as well! Christine will be joined in conversation by critically acclaimed author, Ivy Pochoda.

Register for the event here!

Enjoying our virtual events? Consider donating $5 to Pages or purchase your copy of Place of the Drowned here!

About Palace of the Drowned

From the bestselling author of Tangerine, a "taut and mesmerizing follow up...voluptuously atmospheric and surefooted at every turn” (Paula McLain, author of The Paris Wife and When the Stars Go Dark).

It’s 1966 and Frankie Croy retreats to her friend’s vacant palazzo in Venice. Years have passed since the initial success of Frankie’s debut novel and she has spent her career trying to live up to the expectations. Now, after a particularly scathing review of her most recent work, alongside a very public breakdown, she needs to recharge and get re-inspired.

Then Gilly appears. A precocious young admirer eager to make friends, Gilly seems determined to insinuate herself into Frankie’s solitary life. But there’s something about the young woman that gives Frankie pause. How much of what Gilly tells her is the truth? As a series of lies and revelations emerge, the lives of these two women will be tragically altered as the catastrophic 1966 flooding of Venice ravages the city. Suspenseful and transporting, Christine Mangan's Palace of the Drowned brings the mystery of Venice to life while delivering a twisted tale of ambition and human nature.

CHRISTINE MANGAN is the author of the national bestseller, Tangerine. She has her PhD in English from University College Dublin, with a focus on 18th-century Gothic literature, and an MFA in fiction writing from the University of Southern Maine.

IVY POCHODA  is the author of the critically acclaimed novels Wonder Valley, Visitation Street and These Women. Wonder Valley won the 2018 Strand Critics Award for Best Novel and was a finalist Los Angeles Times Book Prize and Le Grand Prix de Litterature Americaine, as well as being chosen as an NPR and Los Angeles Times Book of the Year. Visitation Street won the Prix Page America in France and was chosen as an Amazon Best Book of the Month, Amazon Best Book of 2013, and a Barnes & Noble Discover Great New Writers selection. Her books have been translated into five languages. Her writing has appeared in The New York Times, The Wall Street Journal, The Los Angeles Times & The Los Angeles Review of Books. Her first novel The Art of Disappearing, was published by St. Martin’s Press in 2009. She teaches creative writing at the Studio 526 Skid Row.

Palace of the Drowned: A Novel (Hardcover)