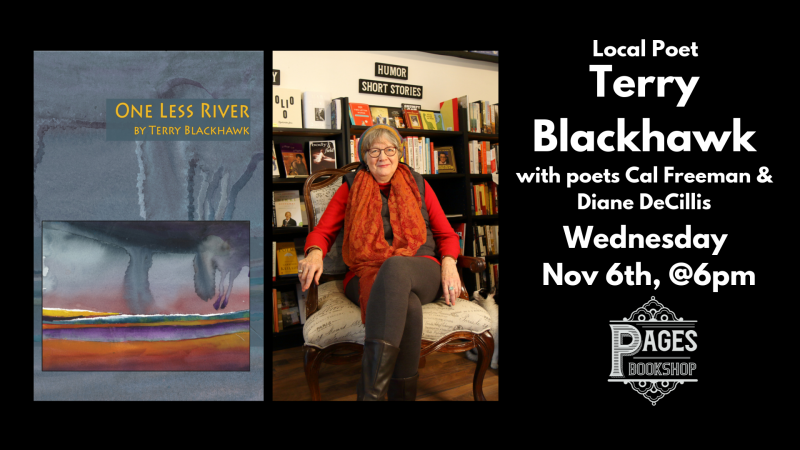 We are thrilled to have Terry Blackhawk back at Pages to celebrate her newest book of poetry "One Less River" which has been described as a collection of refined, learned, and liberating poetry. Terry will be joined by fellow poets Diane DeCillis and Cal Freeman.

This event is free and open to the public Terry, Diane and Cal's books of poetry will be for sale before and after the event.

About One Less River

In "One Less River," Terry Blackhawk follows Hafiz's injunction to "Greet yourself / In your thousand other forms / As you mount the hidden tide and travel / Home." Hafiz, through this epigraph, serves her well. The book journeys through loves and losses, elegies for friends and poets, and walks for a while alongside Protea, a mythical female persona—before arriving at various explorations of ars poetica. In the search for home, the poems also take on a variety of poetic forms—shape-shifting, crossing boundaries, inhabiting myriad beings. While steeped in nature, the poems nod to city skylines and are never far from an awareness of inhumanity's toll. One Less River covers a lot of ground and deepens on second and third readings. Set on beaches, shores, or along the Detroit River and on the city's beloved Belle Isle, the poems follow the author's "hidden tide" to Venice, Provincetown, Costa Rica, and elsewhere. One door opens the manuscript; another ends it. While borrowing throughout from Whitman, the door in the final line of the collection leads back to Dickinson whose room, with its light and simplicity, invites us in.

TERRY BLACKHAWK is the author of many poetry collections, including ONE LESS RIVER (Mayapple Press, 2019), THE WHISK AND WHIR OF WINGS (The Ridgeway Press, 2016), ESCAPE ARTIST (BkMk Press at the University of Missourri-Kansas City, 2003), winner of the John Ciardi Prize. Her awards include a Kresge Arts in Detroit Literary Fellowship, the Pablo Neruda Poetry Prize, and grants from the National Endowment for the Humanities and the Michigan Council for the Arts. She has poems in many journals and anthologies and on line at Rattle, The Collagist, Solstice, Verse Daily and elsewhere.

DIANE DECILLIS owned an award-winning art gallery for over 33 years. Her first poetry collection Strings Attached (Wayne State Univ. Press) has been honored as a Michigan Notable Book for 2015, won the 2015 Next Generation Indie Book Award for poetry, and was a finalist for the Forward Indie Fab Book Award. Her poems have been nominated for three Pushcart Prizes, and Best American Poetry. Poems, short stories, and essays have appeared in CALYX, Columbia Review, Minnesota Review, Adirondack Review, Nimrod, Rattle, Connecticut Review, and numerous other journals. She currently hosts a literary reading series Mondays at the Maple at the Maple Theater.

CAL FREEMAN is the author of the book Fight Songs. His writing has appeared in many journals including Southword, The Moth, Passages North, The Journal, Hippocampus, Drunken Boat, and The Poetry Review. He currently serves as music editor of The Museum of Americana and teaches at Oakland University.