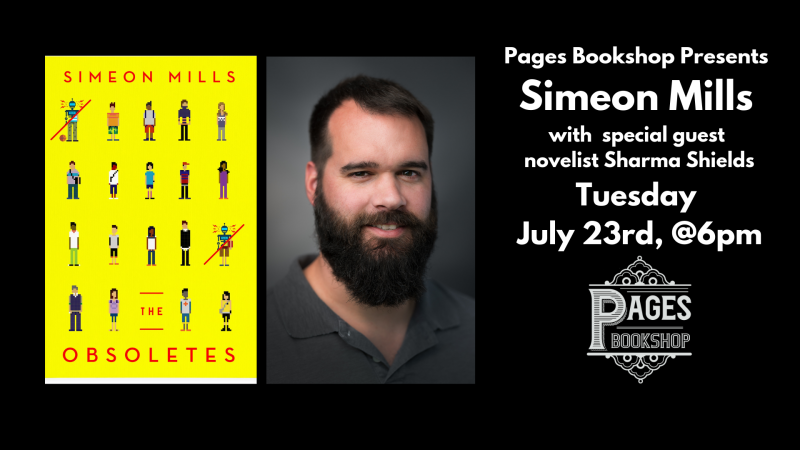 We are so excited to have graphic artist, writer and teacher Simeon Mills at Pages for his new book "The Obsoletes" which is a thought-provoking coming-of-age novel about two human-like teen robots navigating high school, set in Michigan in the 1980s. Simeon will be joined by author Sharma Shields, whose latest book "The Cassandra" came out earlier this year.

Whether you like sci-fi and robots, or historical fiction and mythology, this event has you covered!

It is free and open to the public. Simeon and Sharma's books will be available for purchase before and after the event.

Fraternal twin brothers Darryl and Kanga are just like any other teenagers trying to make it through high school. They have to deal with peer pressure, awkwardness, and family drama. But there's one closely guarded secret that sets them apart: they are robots. So long as they keep their heads down, their robophobic neighbors won't discover the truth about them and they just might make it through to graduation.

But when Kanga becomes the star of the basketball team, there's more at stake than typical sibling rivalry. Darryl--the worrywart of the pair--now has to work a million times harder to keep them both out of the spotlight. Though they look, sound, and act perfectly human, if anyone in their small, depressed Michigan town were to find out what they truly are, they'd likely be disassembled by an angry mob in the middle of their school gym.

Heartwarming and thrilling, Simeon Mills's charming debut novel is a funny, poignant look at brotherhood, xenophobia, and the limits of one's programming.

The Cassandra follows a woman who goes to work in a top secret research facility during WWII, only to be tormented by visions of what the mission will mean for humankind.

Mildred Groves is an unusual young woman. Gifted and cursed with the ability to see the future, Mildred runs away from home to take a secretary position at the Hanford Research Center in the early 1940s. Hanford, a massive construction camp on the banks of the Columbia River in remote South Central Washington, exists to test and manufacture a mysterious product that will aid the war effort. Only the top generals and scientists know that this product is processed plutonium, for use in the first atomic bombs.

Mildred is delighted, at first, to be part of something larger than herself after a lifetime spent as an outsider. But her new life takes a dark turn when she starts to have prophetic dreams about what will become of humankind if the project is successful. As the men she works for come closer to achieving their goals, her visions intensify to a nightmarish pitch, and she eventually risks everything to question those in power, putting her own physical and mental health in jeopardy. Inspired by the classic Greek myth, this 20th century reimagining of Cassandra's story is based on a real WWII compound that the author researched meticulously. A timely novel about patriarchy and militancy, The Cassandra uses both legend and history to look deep into man's capacity for destruction, and the resolve and compassion it takes to challenge the powerful.

SIMEON MILLS is a graphic artist, writer, and teacher. His novel The Obsoletes, published by Skybound Books, comes out on May 14, 2019 and follows two teenage brothers as they navigate high school while hiding their true identity: they are actually robots. Mills majored in architecture at Columbia University and received his MFA in fiction from the University of Montana. Simeon now teaches middle school English in Spokane, Washington, where he lives with his wife and two children. Visit SimeonMills.com for more information on Mills, or skybound.com/the-obsoletes for more on The Obsoletes.

SHARMA SHIELDS Sharma Shields is the author of a short story collection, Favorite Monster, and two novels, The Sasquatch Hunter’s Almanac and The Cassandra. Sharma’s short stories and essays have appeared in The New York Times, Electric Lit, Catapult, Slice, Fairy Tale Review, Kenyon Review, Iowa Review, Fugue, and elsewhere and have garnered such awards as the 2016 Washington State Book Award, the Autumn House Fiction Prize, the Tim McGinnis Award for Humor, a Grant for Artist Projects from Artist Trust, and the A.B. Guthrie Award for Outstanding Prose. She received her B.A. in English Literature from the University of Washington (2000) and her MFA from the University of Montana (2004). Sharma has worked in independent bookstores and public libraries throughout Washington State and lives in Spokane with her husband and two young children. She is the President of the Board of the Friends of the Spokane County Library District.

The Obsoletes: A Novel (Hardcover)

The Cassandra: A Novel (Hardcover)