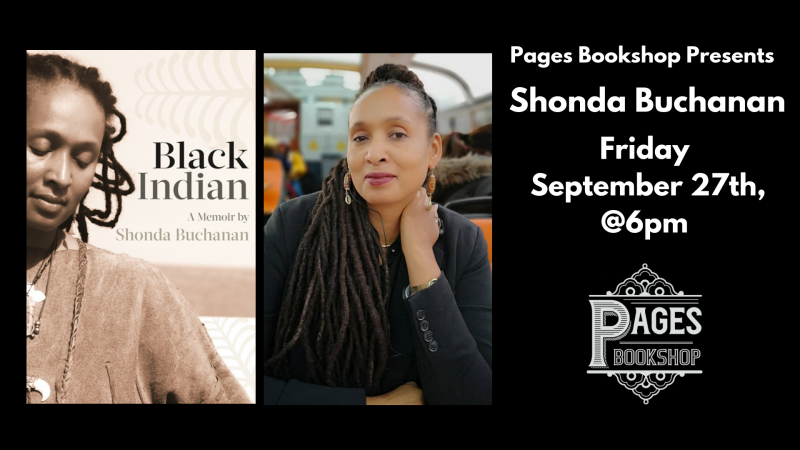 We are thrilled to have Shonda Buchanan at Pages for her memoir, "Black Indian" a searing and raw story about Shonda's family’s legacy of being African Americans with American Indian roots and how they dealt with not just society’s ostracization but the consequences of this dual inheritance. This book is a part of Wayne State University Press' Made in Michigan Series.

This event is free and open to the public. Shonda's book will be available for purchase before and after the event.

Black Indian, searing and raw, is Amy Tan’s The Joy Luck Club and Alice Walker’s The Color Purple meets Leslie Marmon Silko’s Ceremony—only, this isn’t fiction. Beautifully rendered and rippling with family dysfunction, secrets, deaths, alcoholism, and old resentments, Shonda Buchanan’s memoir is an inspiring story that explores her family’s legacy of being African Americans with American Indian roots and how they dealt with not just society’s ostracization but the consequences of this dual inheritance.

Buchanan was raised as a Black woman, who grew up hearing cherished stories of her multi-racial heritage, while simultaneously suffering from everything she (and the rest of her family) didn’t know. Tracing the arduous migration of Mixed Bloods, or Free People of Color, from the Southeast to the Midwest, Buchanan tells the story of her Michigan tribe—a comedic yet manically depressed family of fierce women, who were everything from caretakers and cornbread makers to poets and witches, and men who were either ignored, protected, imprisoned, or maimed—and how their lives collided over love, failure, fights, and prayer despite a stacked deck of challenges, including addiction and abuse. Ultimately, Buchanan’s nomadic people endured a collective identity crisis after years of constantly straddling two, then three, races. The physical, spiritual, and emotional displacement of American Indians who met and married Mixed or Black slaves and indentured servants at America’s early crossroads is where this powerful journey begins.

Black Indian doesn’t have answers, nor does it aim to represent every American’s multi-ethnic experience. Instead, it digs as far down into this one family’s history as it can go—sometimes, with a bit of discomfort. But every family has its own truth, and Buchanan’s search for hers will resonate with anyone who has wondered "maybe there’s more than what I’m being told."

SHONDA BUCHANAN is the former Interim Chair/Assistant Professor of the Department of English & Foreign Languages at Hampton University. The fall 2017 Writer-in-Residence at William & Mary College, Shonda’s family memoir, Black Indian, will be released by Wayne State University Press in Fall 2018. As a culture and literary arts ambassador and lecturer, Shonda has conducted workshops and presentations for the U.S. Government Accountability Organization, the U.S. Embassy of Kuala Lumpur/U.S. Department of State, the Athens Institute for Education and Research in Athens, Greece, the Association of Writers & Writing Programs, the Hampton Roads Writers Conference, the Poetry Society of Virginia and numerous others.

Her poetry and essays have been featured in numerous anthologies including The Seventh Wave, Urban Voices: 51 Poems from 51 American Poets, Silver Birch Press, Art Meets Literature: An Undying Love Affair,Bum Rush the Page: A Def Poetry Jam, Step into a World: A Global Anthology of the New Black Literature, Geography of Rage: Remember the Los Angeles Riots of 1992, and Catch the Fire!!! A Cross-Generational Anthology of Contemporary African-American Poetry, Rivendale, LongStoryShort, and Voices from Leimert Park, two poetry anthologies which she edited. As a journalist and professor, she engages issues of selfhood and human agency, race and ethnicity, class and gender, as well as technology and environment.