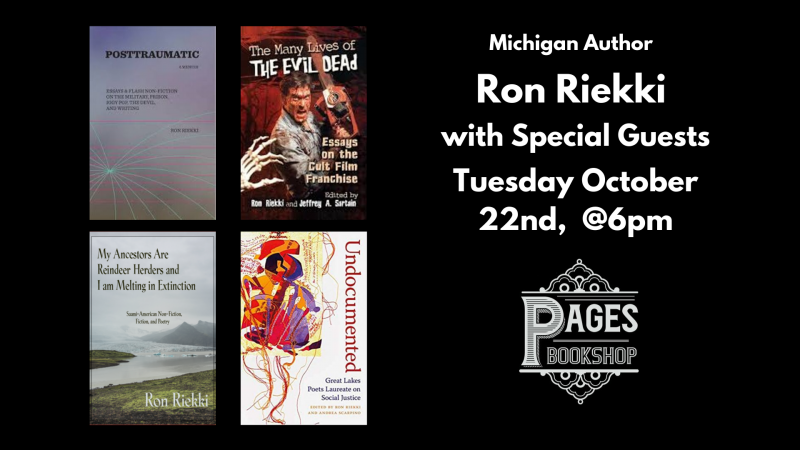 We are excited to have local, Michigan author Ron Riekki at Pages to celebrate four of his most recent books, Posttraumatic: A Memoir, The Many Lives of The Evil Dead: Essays on the Cult Film Franchise, My Ancestors are Reindeer Herders and I Am Melting in Extinction: Saami-American Non-Fiction, Fiction, and Poetry and Undocumented: Great Lakes Poets Laureate on Social Justice.

Ron will be joined by four other authors, Jim Ferris, Dennis Hinrichsen, Joel Lipman, and Keith Taylor. This event is free and open to the public. The authors' books will be for sale before and after this event.

Ron Riekki's POSTTRAUMATIC is at turns heartbreaking and hysterically funny, profound and absurd, filled with acerbic wit and a sense of childlike innocence. Drawing on Riekki's experience in the military, as an EMT, as an actor, his time at a marketing firm in China, and much, much more, the essays contained in POSTTRAUMATIC are at times hard to believe, but are never short of brutally honest.

The Many Lives of The Evil Dead: Essays on the Cult Film Franchise

One of the top-grossing independent films of all time, The Evil Dead (1981) sparked a worldwide cult following, resulting in sequels, remakes, musicals, comic books, conventions, video games and a television series. Examining the legacy of one of the all-time great horror films, this collection of new essays covers the franchise from a range of perspectives. Topics include The Evil Dead as punk rock cinema, the Deadites’ (demon-possessed undead) place in the American zombie tradition, the powers and limitations of Deadites, evil as affect, and the films’ satire of neoliberal individualism.

My Ancestors are Reindeer Herders and I Am Melting in Extinction: Saami-American Non-Fiction, Fiction, and Poetry

In My Ancestors are Reindeer Herders and I am Melting in Extinction, Ron Riekki presents a collection of non-fiction, short stories, and poetry about the Karelian- and Saami-American experience. In true nomadic fashion, his writing takes the reader to Kuusamo, Utah, Berkeley, the Upper Peninsula of Michigan, Lake Mohave, Yosemite, Karelia, and a hazmat facility where all the animals on site have been forgotten.

JIM FERRIS is a poet, performance artist, and scholar in communication studies. Poet Laureate of Lucas County, Ohio, from 2015-2019, Ferris has received awards for performance and mathematics as well as poetry and creative nonfiction. He is author of Slouching Towards Guantanamo, Facts of Life, and The Hospital Poems, which won the Main Street Rag Book Award in 2004. Ferris, who holds a doctorate in performance studies, has performed at the Kennedy Center and across the United States, Canada and Great Britain; recent performance work includes his current one-man performance “Is Your Mama White?” as well as the solo performance “Scars: A Love Story.” Past president of the Society for Disability Studies and the Caucus of Disabled and D/deaf Writers Caucus, he is founding chair of the Disability Issues Caucus of the National Communication Association, which recently named its award for outstanding achievement in disability and communication after him. Ferris was named outstanding scholar in performance and theatre by the Central States Communication Association. His writing has appeared in dozens of publications, ranging from Poetry magazine to the Georgia Review, from Beauty Is a Verb to Text & Performance Quarterly, from the Michigan Quarterly Review to weekly newspapers. Since 2008, Ferris has held the Ability Center of Greater Toledo Endowed Chair in Disability Studies at the University of Toledo, where he directs the School of Interdisciplinary Studies.

DENNIS HINRICHSEN'S most recent work is [q / lear], a chapbook from Green Linden Press, and Skin Music, winner of the 2014 Michael Waters Poetry Prize from Southern Indiana Review Press. His previous books include Rip-tooth (2010 Tampa Poetry Prize), Kurosawa’s Dog (2008 FIELD Poetry Prize), and Detail from The Garden of Earthly Delights (1999 Akron Poetry Prize). Other awards include the 2015 Rachel Wetzsteon Chapbook Prize from Map Literary for Electrocution, A Partial History as well as the 2016 Third Coast Poetry Prize and a 2014 Best of the Net Award. From May 2017 - April 2019, he served as the first Poet Laureate of the Greater Lansing [MI] area.

Emeritus Professor of English at the University of Toledo, JOEL LIPMAN was born in Washington, DC, and raised in Kenosha, Wisconsin. Five-time recipient of Ohio Arts Council Individual Artist fellowships in Poetry and founding co-director of the Toledo Poets Center, Joel’s literary distinctions include the Ohio Governor’s Award for an Individual Artist and the Ohioana State Library Pegasus Award for Lifetime Achievement in Poetry. Named Lucas County’s first Poet Laureate in 2008, he served in that capacity until 2014, and in 2013 founded ABRACADABRA Studio of Visual Poetics http://abracadabrapoetry.com/. Many of Joel’s poems are historically or personally place specific. Mercury Vapor Lamp, his first book, focused on the landscape, place names and communities of southwestern Wisconsin’s Driftless Area. His poetry books are limited, modest editions, small and rare – among them Machete Chemistry/Panades Physics, co-authored with Yasser Musa, a collection written during a Fulbright Fellowship year in Belize. Other collections include Provocateur, The Real Ideal and Ransom Notes. Additional examples of Joel’s poetry, scholarly and visual literary work are on-line at the Light & Dust Anthology of Poetry and The Poetry Foundation websites.

KEITH TAYLOR has authored or edited 17 books and chapbooks. His most recent, the chapbook Ecstatic Destinations, was published in 2018. His last full length collection, The Bird-while (Wayne State University Press, 2017), won the Bronze medal for the Foreword/Indies Poetry Book of the Year. His poems, stories, reviews, essays and translations have appeared widely in North America and in Europe.

The Many Lives of The Evil Dead: Essays on the Cult Film Franchise (Paperback)

My Ancestors Are Reindeer Herders and I Am Melting In Extinction: Saami-American Non-Fiction, Fiction, and Poetry (Hardcover)