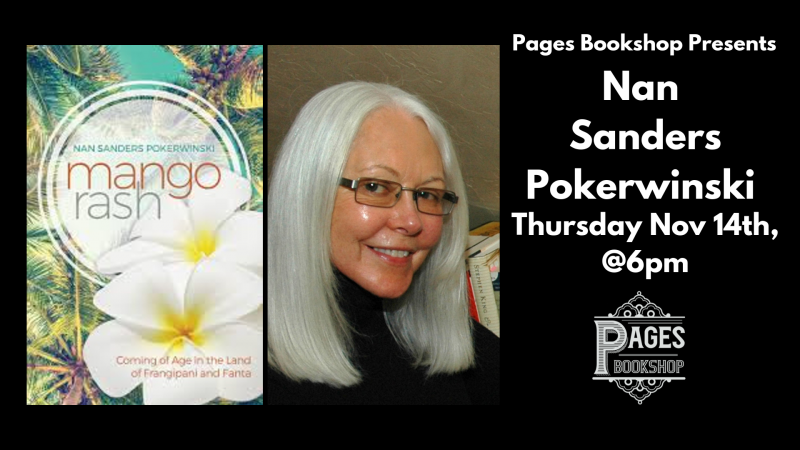 We are thrilled to welcome former Detroit Free Press journalist, Nan Sanders Pokerwinski to our store for her intriguing memoir, "Mango Rash: Coming of Age in the Land of Frangipani and Fanta." With a dash of teenage sass, Nan's memoir chronicles two alien landscapes: the tricky terrain of adolescence and the remote U.S. territory of American Samoa.

Nan will be accompanied by former Free Press colleague Joe Swickard who will interview and moderate a discussion with Nan during this event.

The event is free and open to the public. Nan's book will be for sale before and after the event.

With a dash of teenage sass, MANGO RASH chronicles Nancy's search for adventure--and identity--in two alien realms: the tricky terrain of adolescence and the remote U.S. territory of American Samoa. Against a backdrop of lava-rimmed beaches, frangipani-laced air, and sensual music, Nancy immerses herself in 1960s island culture with a colorful cast of Samoan and American expat kids.

But life is not one big beach party, Nancy soon finds, when she clashes with her parents over forbidden boys and discovers double standards in the expat community. Samoa, too, is experiencing growing pains as ancient customs collide with 20th-century ways. In the midst of all this, a hurricane shatters the peaceful paradise, delivering lessons in attachment and loss, strength and survival.

Like Nancy, readers of this unforgettable memoir will fall in love with Samoa's biscuit-tin drum serenades, its mountains like mounds of cut velvet cushions, and its open-hearted people, who face adversity with grace. And just as Nancy does when her own health crisis thrusts her into a very different kind of unfamiliar territory, readers will draw strength from fa'a Samoa: the Samoan Way.

In language as lush as the island landscape, MANGO RASH enchants, entertains, and, ultimately, inspires with its message about embracing and learning from other cultures.

NAN SANDERS POKERWINSKI is a former science writer for the Detroit Free Press and the University of Michigan, whose award-winning work (under the byline Nancy Ross-Flanigan) has appeared in numerous other magazines, newspapers, and online publications. Her blog, Heartwood (http://www.nanpokerwinski.com/blog) focuses on creativity, connection, and contentment. Find Nan at: nansanpo@ameritech.net, http://www.nanpokerwinski.com/, https://www.facebook.com/MangoRash/, and @nansanpo

JOE SWICKARD was a writer and editor at the Free Press for 33 years, taking a buy-out in 2012. Much of his career was focused on crime and criminal justice issues and also included assignments to Albania, the Balkans and Iraq.

He won a national Emmy in 2006 for his coverage with photojournalist David Gilkey of a Michigan-based US Marine Reserve unit in Fallujah, Iraq. He was a member of the team, spearheaded by Jim Schaefer and M.L. Elrick, awarded the 2009 Pulitzer Prize for unearthing and pursuing the Kwame Kilpatrick scandals. In 2012 he was inducted into the Michigan Journalism Hall of Fame. A frequent visitor to Hawaii, Joe is also an island boy at heart.

Mango Rash: Coming of Age in the Land of Frangipani and Fanta (Paperback)