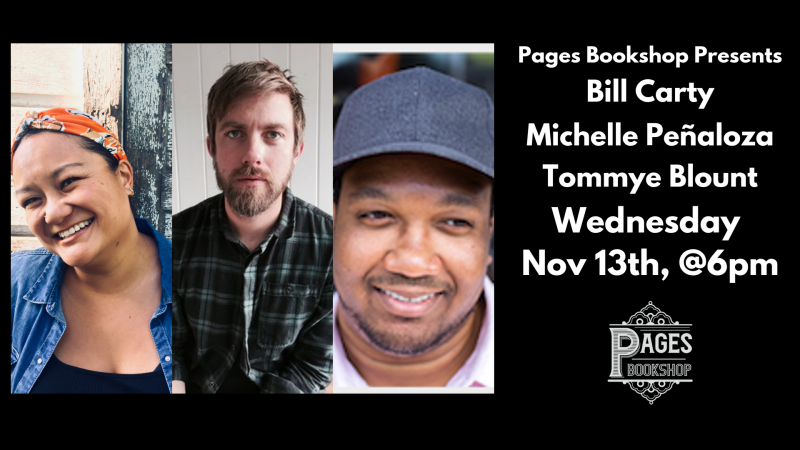 We are thrilled to welcome amazing poets Bill Carty, Michelle Peñaloza, and Tommye Blount to Pages to read from their latest books of poetry, "Huge Cloudy", "Former Possessions of the Spanish Empire" and "What Are We Not For." This will make for an incredible evening of poetry that you won't want to miss!

This event is free and open to the public. Bill, Michelle and Tommye's books will be for sale before and after the event.

In his debut collection HUGE CLOUDY, Bill Carty attends to the world, bringing thought to vision with a cartographer's sense of scale, and a shipbuilder's attention to detail. Alternating stretches of lyric narrative with longer serial poems, HUGE CLOUDY proceeds by a Ship of Theseus poetics. Like a series of field notes, the poems document change as the contemporary landscape is revised by big and small forces--the bank vault that becomes an open mic, the pond that becomes condos, the puddle of vomit to walk around. These poems attend to the ugliness of a world, of a history, or poetic lineage, with a magic map. Drawing as much from the neighborhoods of Seattle as from coastal environs, this is a collection that folds the map--a kind of bounding sphere--in on itself.

About Former Possessions of the Spanish Empire:

Ambitious and emotionally complex, Michelle Peñaloza's debut poetry collection, Former Possessions of the Spanish Empire, explores grief and violence, the intersections of race, gender, and sexuality, and the complications of desire. Former Possessions of the Spanish Empire won the 2018 Hillary Gravendyk National Prize. Aimee Nezhukumatathil, author of Oceanic, calls Peñaloza's book "remarkable" and says "Of this I am certain: I'll be celebrating this poet for many years to come."

Former Possessions of the Spanish Empire is a work simultaneously culturally specific and universal, with a scope ambitious and emotionally complex, it explores questions of grief and violence, and negotiates loss across landscapes and spans of time. It engages with the intersections of race, gender, and sexuality and the complications of desire.

About What Are We Not For:

The men and boys in these poems are transformed into instruments of pleasure and of destruction, worshipped artifacts and disfigured toys, victims and assailants. What Are We Not For moves its reader toward caustic longing, the hope that danger and risk promise.

Through biography, fairy tale, and history, Tommye Blount’s debut chapbook What Are We Not For redraws the fatherland of manhood as a territory beyond whose borders tenderness and cruelty fight for space.

BILL CARTY is the author of Huge Cloudy (Octopus Books). He has received poetry fellowships from the Fine Arts Work Center in Provincetown, Artist Trust, and Hugo House, and he was awarded the 2017 Emily Dickinson Award from the Poetry Society of America. His poems have appeared in the Boston Review, Ploughshares, Oversound, Iowa Review, Conduit, Warscapes, and other journals. Originally from coastal Maine, Bill now lives in Seattle, where he is Senior Editor at Poetry Northwest. He teaches at Hugo House, the UW Robinson Center for Young Scholars, and Edmonds Community College.

MICHELLE PEÑALOZA is the author of Former Possessions of the Spanish Empire, winner of the 2018 Hillary Gravendyk National Poetry Prize (Inlandia Books, 2019). She is also the author of two chapbooks, landscape/heartbreak (Two Sylvias, 2015), and Last Night I Dreamt of Volcanoes (Organic Weapon Arts, 2015). Her work can be found in River Styx, Prairie Schooner, upstreet, Pleiades, Poetry Northwest and elsewhere. She is the recipient of several fellowships the University of Oregon, Kundiman, and The Key West Literary Seminar. Michelle has also received support from Artist Trust, Lemon Tree House, Caldera, 4Culture, Literary Arts, VONA/Voices, and the Bread Loaf Writers' Conference, among others. The proud daughter of Filipino immigrants, Michelle was born in the suburbs of Detroit, MI and raised in Nashville, TN. She now lives in rural Northern California.

TOMMYE BLOUNT is the author of What Are We Not For (Bull City Press, 2016) and Fantasia for the Man in Blue (Four Way Books, 2020). A graduate of Warren Wilson College’s MFA Program for Writers, Tommye has been the recipient of fellowships and scholarships from Cave Canem, Bread Loaf Writers’ Conference, and the Kresge Arts in Detroit Foundation. More of his work can be found in Poetry, New England Review, Ninth Letter, Ecotone, Cherry Tree, Kenyon Review, and elsewhere. Born and raised in Detroit, Tommye now lives Novi.

What Are We Not for (Paperback)