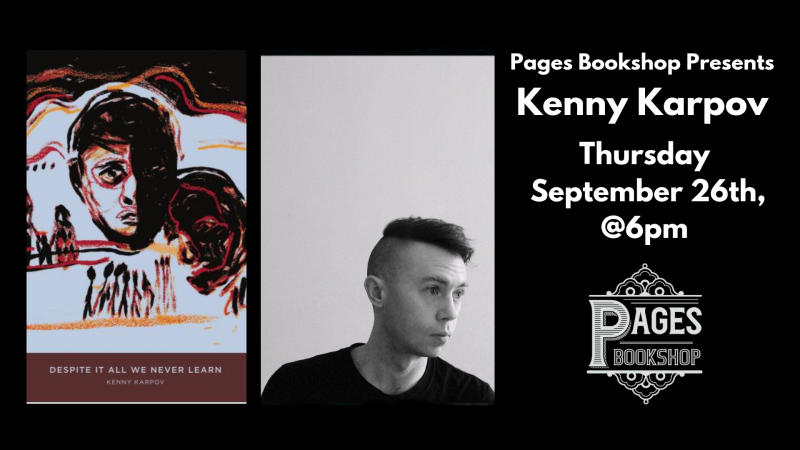 We are so excited to have Kenny Karpov at Pages for his new book, "Despite It All We Never Learn." He was recently on Detroit Today with Stephen Henderson to talk about his book, listen here.

This event is free and open to the public. Kenny's book will be available for purchase before and after the event.

About Despite It All We Never Learn:

“Despite It All We Never Learn” is a collection of short essays and 85 testimonials from refugees that were recorded and written while I was volunteering in the Mediterranean Sea onboard various rescue vessels operated by non-governmental organizations (NGOs). The purpose of the project is to increase awareness of the existence of the people taking to the sea and the abuses they endured through their own words.

This nonfiction novella acknowledges a resilient community of refugees making the journey from Libya to the Mediterranean Sea by unsafe dinghies or “rafts.” It chronicles the men, women, and children fleeing from their homeland from parts of the Middle East and Africa. Many of the refugees are coming to escape discrimination and terrible poverty, while others are fleeing years of war and conflict. As migrants pass through Libya, they enter a system marked by abuse, corruption and a near-complete vacuum of state authority. Many migrants remain in the system for months or years, some settling or returning home and some raising money for an onward journey to Europe. These stories have captivated me for nearly four years, even after paging through them hundreds of times. “Despite It All We Never Learn” an unbelievable, rare and intimate look at their stories, and a deep look into the largest migration crisis since World War II.

KENNY KARPOV is a visual storyteller & documentary photographer and first-time author. He is guided by the personal encounters of people and places. With a spontaneous method, he portrays people and that what surrounds them. He has traveled the world for the last five years documenting the lives of people at various stages of their migration from war-torn countries to Europe. His latest project is a nonfiction novella entitled Despite It All We Never Learn - a collection of refugee testimonials that were recorded & written aboard various rescue vessels in the Mediterranean Sea over the course of seventeen missions from 2015 - 2019.