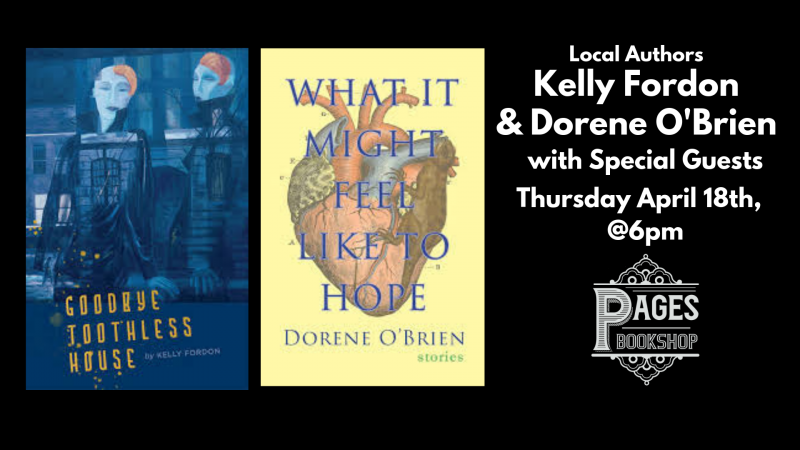 We are beyond excited to have at Pages local writer and poet Kelly Fordon for her latest book of poetry and local writer Dorene O'Brien for her last collection of stories. Kelly and Dorene will be joined by writers, Cal Freeman Zilka Joseph, Michael Lauchlan and who will also be doing short readings from their latest works.

This event is free and open to the public. All of the author's books will be for sale before and after this event.

In deceptively familiar language, Kelly Fordon turns the reader’s gaze just a few degrees left, to an elegiaic, apocalyptic, nearly unbearable vision of ordinary life, where everyday transgressions pare down the self to an elemental, alien form.

A masterful and eclectic mix of stories that consider the infinitely powerful, and equally naïve and damning force that is human hope. A couple tries to come to terms with one another as they travel west in the uncomfortable twilight of their youth; a mortician and an idealistic novelist spar about the true nature of death; an aspiring author hopes to impress Tom Hanks with zombies; a tarot reader deals out the future of Detroit. Showcasing her diverse talents, O’Brien offers a panoply of characters and settings that dwell beyond the borders of certainty, in a place where all that has been left to them is an inkling of possibility upon which they must place all their hopes. These stories offer a variety of tones, forms, and themes in which O’Brien displays an amazing range and control of her craft, all while exploring the essential nature of humanity with nuance, empathy, and at times a touch of skepticism.

KELLY FORDON's work has appeared in The Florida Review, The Kenyon Review (KRO), Rattle and various other journals. Her novel-in-stories, Garden for the Blind, was chosen as a 2016 Michigan Notable Book among other awards. On the Street Where We Live, a one-act play adapted from her poetry was chosen for the 2018 Dream Up Festival in New York. She is the author of three award-winning poetry chapbooks and a full-length poetry collection, Goodbye Toothless House (2019). Another full-length poetry collection SNAP will be published in 2020. www.kellyfordon.com .

CAL FREEMAN was born and raised in Detroit, MI. He is the author of the book Brother Of Leaving (Marick Press) and the pamphlet Heard Among The Windbreak (Eyewear Publishing). His writing has appeared in many journals including New Orleans Review, Passages North, The Journal, Commonweal, Drunken Boat and The Poetry Review. He is a recipient of The Devine Poetry Fellowship (judged by Terrance Hayes); he has also been nominated for multiple Pushcart Prizes in both poetry and creative nonfiction. He regularly reviews collections of poetry for the radio program, Stateside, on Michigan Public Radio.

ZILKA JOSEPH was nominated twice for a Pushcart. Her poems have appeared in Poetry, Poetry Daily, MQR, Frontier Poetry,Kenyon Review Online, Mantis, Gastronomica, and in anthologies such as Cheers To Muses: Works by Asian American Women. Lands I Live In and What Dread, her chapbooks, were nominated for a PEN America award and a Pushcart respectively. Her book Sharp Blue Search of Flame (Wayne State University Press) was a finalist for the Foreword Indie Book Award. She teaches creative writing workshops, and is an independent editor and manuscript coach. www.zilkajoseph.com.

DORENE O'BRIEN is a Detroit-based creative writing teacher and writer whose stories have won the Red Rock Review Mark Twain Award for Short Fiction, the Chicago Tribune Nelson Algren Award, the New Millennium Writings Fiction Prize, and the international Bridport Prize. She is also an NEA and a Vermont Studio Center creative writing fellow. Her work has been nominated for two Pushcart prizes, has been published in special Kindle editions and has appeared in the Baltimore Review, Madison Review, Best of Carve Magazine, Short Story Review, Southern Humanities Review, Detroit Noir, Montreal Review, Passages North, and others. Voices of the Lost and Found, her first fiction collection, was a finalist for the Drake Emerging Writer Award and won the USA Best Book Award for Short Fiction. Her fiction chapbook, Ovenbirds and Other Stories, won the Wordrunner Chapbook Prize. Her second full-length collection, What It Might Feel Like to Hope, was named first runner-up in the Mary Roberts Rinehart Fiction Prize and will be released this March by Baobab Press. She is currently writing a literary/Sci-Fi hybrid novel.