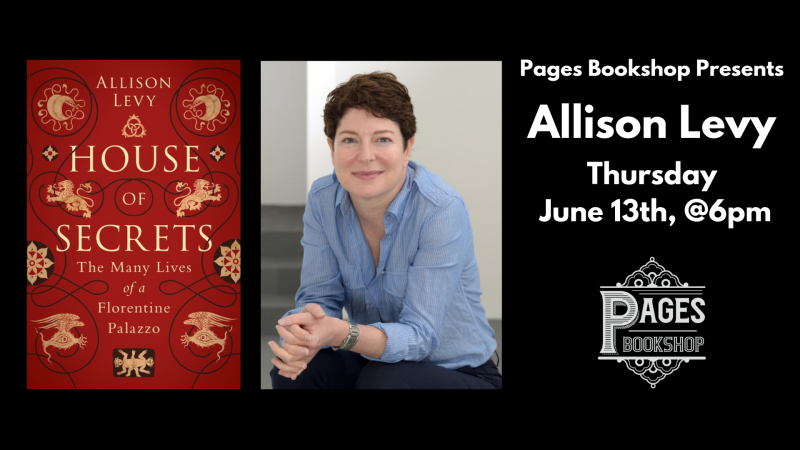 We are thrilled to have historian and writer, Allison Levy at  Pages to discuss her fascinating new book "House of Secrets: the Many Lives of a Florentine Palazzo" with us.

his event is free and open to the public so we hope you will join us. Allison's book will be for sale before and after this event.

About House of Secrets:

House of Secrets tells the remarkable story of Palazzo Rucellai from behind its celebrated façade. The house, beginning with its piecemeal assemblage by one of the richest men in Florence in the fifteenth century, has witnessed endless drama, from the butchering of its interior to a courtyard suicide to champagne-fueled orgies on the eve of World War I to a recent murder on its third floor. When the author, an art historian, serendipitously discovers a room for let in the house, she lands in the vortex of history and is tested at every turn―inside the house and out. Her residency in Palazzo Rucellai is informed as much by the sense of desire giving way to disappointment as by a sense of denial that soon enough must succumb to truth. HOUSE OF SECRETS is about the sharing of space, the tracing of footsteps, the overlapping of lives. It is about the willingness to lose oneself behind the façade, to live between past and present, to slip between the cracks of history and the crevices of our own imagination.

It will appeal to a broad variety of readers, from Italophiles and art history buffs to readers of escapist memoir, travel journeys, and literary true crime.

ALLISON LEVY is Digital Scholarship Editor at Brown University. An art historian educated at Bryn Mawr College, she has held teaching appointments at University College London, Wheaton College, and Tulane University. Allison has published widely on early modern Italy and Europe and serves as General Editor of the Amsterdam University Press book series Visual and Material Culture, 1300–1700. Her research has been funded by the National Endowment for the Humanities, the American Association of University Women, the Getty Research Institute, the Samuel H. Kress Foundation, the Whiting Foundation, and the Bogliasco Foundation, among others.

House of Secrets: The Many Lives of a Florentine Palazzo (Hardcover)