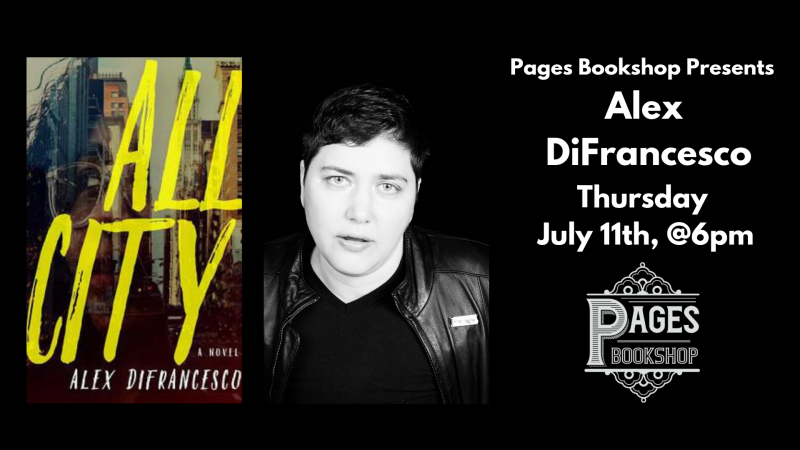 We are thrilled to host Alex DiFrancesco for their last book "All City." Alex will be joined by Penelope Jeanne Girlblood, Margo M and Patience Young.

This event is free and open to the public. Alex's book will be for sale before and after the event.

All City: A Novel is a near-future speculative fiction that addresses climate change and gentrification told from the perspective of those most affected by these scourges. An indictment against the commodification of poverty and the looming threat of climate change, All City tells the story a convenience store worker and a genderqueer anarchist who, together, squat in an abandoned luxury building after a superstorm decimates New York City and the wealthy class flees.

ALEX DIFRANCESCO is the author of the essay collection Psychopomps (CCM Press) and the novel All City (Seven Stories Press). They have published fiction in The Carolina Quarterly, The New Ohio Review, and Monkeybicycle, and they are a winner of Sundress Academy for the Arts' 2017 OutSpoken contest for LGBTQ+ writing. DiFrancesco's non-fiction has appeared in The Washington Post, Tin House, Longreads, Brevity, and was a finalist in Cosmonauts Avenue's inaugural non-fiction prize. Their storytelling has been featured at The Fringe Festival, Life of the Law, The Queens Book Festival, and The Heart podcast. DiFrancesco is also a skilled bread baker and pastry cook, a passionate activist and advocate, and has a small, wonderful cat named Sylvia Rivera-Katz.

M; Margo is a person who writes and resides in Cleveland, Ohio. Ver most recent books are pink maggit (Ghost City Press, 2019) and road road road road road (ma press, 2019). Ve has a website (translucent-snapdragons.gq) and a Twitter (@wigglytuff_pink).

PENELOPE JEANNE BRANNEN is a mother, a poet, and a giant wolf. It has been published in Spy Kids Review, Zoomoozophone Review, and Voicemail Poems. When it is not working or writing it enjoys spending its time astral projecting and watching reality television.

PATIENCE YOUNG is a Detroit-bred writer with equal parts dirt and grease under her fingernails. She juxtaposes the simple magic of everyday life with the grief we each carry for our suffering. Rooted in radical vulnerability, her message is one of hope and a fierce belief in the good of us all. Patience believes poetry is a practice in causal non-sequitur, and that if she keeps spinning the combination lock it might open. It's OK if it doesn't; its fun to play with.

All City: A Novel (Paperback)