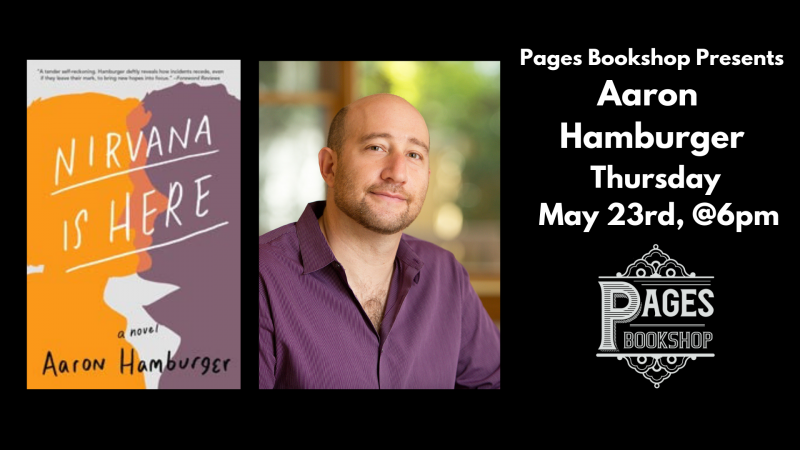 We are thrilled to have Aaron Hamburger at Pages Bookshop for his latest novel, "Nirvana is Here" which has been described as  a wonder of a book, often funny, sometimes heartbreaking, and always enormously honest about what it means to be young and in love.

This event is free and open to the public. Aaron's books will be for sale before and after this event.

About Nirvana is Here:

Have you ever searched for your high school crush online? Two decades after they first met, Medieval Historian Ari Silverman is reconnecting with his high school obsession Justin Jackson, now happily married to a woman and the first African-American CEO of a successful dating website. While preparing to see Justin again, Ari recalls his relationship with Justin in the segregated suburbs of Detroit during the early 1990s and the secrets they still share. At the same time, he’s also grappling with the fate of his ex-husband, a colleague accused of sexually harassing a student. Ultimately the two stories converge, and Ari comes to a fateful decision about his past and present, his life and his inner character. Framed by the meteoric rise and fall of the band Nirvana and the me-too movement, Nirvana is Here touches on issues of identity, race, sex, and family with both poignancy and unexpected humor, with the sensuality and haunting nostalgia of Andre Aciman’s Call Me By Your Name with the raw emotion of Kurt Cobain’s songwriting.

AARON HAMBURGER is the author of the story collection THE VIEW FROM STALIN'S HEAD (Rome Prize, the American Academy of Arts and Letters), the novel FAITH FOR BEGINNERS (a Lambda Literary Award nominee), and NIRVANA IS HERE. His writing has appeared in The New York Times, The Washington Post, Crazyhorse, Tin House, Subtropics, Poets & Writers, Boulevard, and O, the Oprah Magazine. He has received a fellowship from the Edward F. Albee Foundation and residencies from Yaddo and Djerassi. He has taught writing at Columbia University, the George Washington University, and the Stonecoast MFA Program.