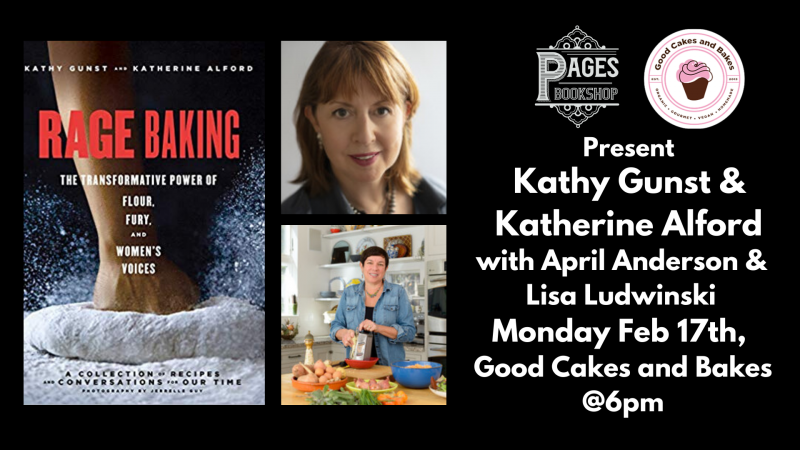 We are so excited to welcome authors Kathy Gunst and Katherine Alford to Detroit for their book, "Rage Baking: the Transformative Power of Flour, Fury and Women's Voices." We will be co-hosting and holding this event with Good Cakes and Bakes located at 9363 Livernois, Detroit, MI 48221.

Kathy and Katherine will be joined in conversation with Good Cakes and Bakes owner, April Anderson, and Sister Pie owner, Lisa Ludwinski.

This event is free and open to the public. Drinks and baked goods will be for sale throughout the evening. We anticipate this event to be full so please try to get there early.

50+ recipes, short essays, and quotes from some of the best bakers, activists, and outspoken women in our country today—this cookbook encourages women to use sugar and sass as a way to defend, resist, and protest.

Since the 2016 election, many women across the country have felt rage, fury, and frustration, wondering how we got here. Some act by calling their senators, some write checks, some join activist groups, march, paint signs, grab their daughters and sons, and raise their voices. But for so many, they also turn to their greatest comfort—their kitchen.

Timely, fun, and creative, this cookbook speaks to both skilled and beginner bakers who are looking for new ways to use their sweetest skills to combine food and activism. Containing a collection of recipes that are satisfying and delicious, Rage Baking unites like-minded women who are passionate about baking and change.

KATHY GUNST is a James Beard Award–winning journalist and the author of fifteen cookbooks. Her most recent books include Soup Swap and Rage Baking (with coauthor Katherine Alford). She is the award-winning Resident Chef for NPR’s Here and Now, heard on over 550 public radio stations with over 5 million listeners. She writes for many publications, including The Washington Post, EatingWell, Yankee, The New York Times, Food & Wine, and others. Gunst teaches food journalism and cooking at schools and universities around the globe.

KATHERINE ALFORD has a proven track record in food. She ran a New York Times 4-star kitchen, has been a Greenmarket Manager, as well as instructor and director of Peter Kump’s Cooking School (now Institute of Culinary Education). She spent the last twenty years at the Food Network, ultimately, as the Senior Vice President of Culinary, where she led the culinary team for TV, digital, and print. She ran the test kitchen that created multiple cookbooks that were IACP finalists, Food & Wine Best of the Best, and New York Times bestsellers. She oversaw recipe development and had a column in Food Network Magazine, the #1 food magazine with a monthly reach of over 1.3 million readers. She grew up in Washington, DC, in a politically active family; her passions are food and politics.