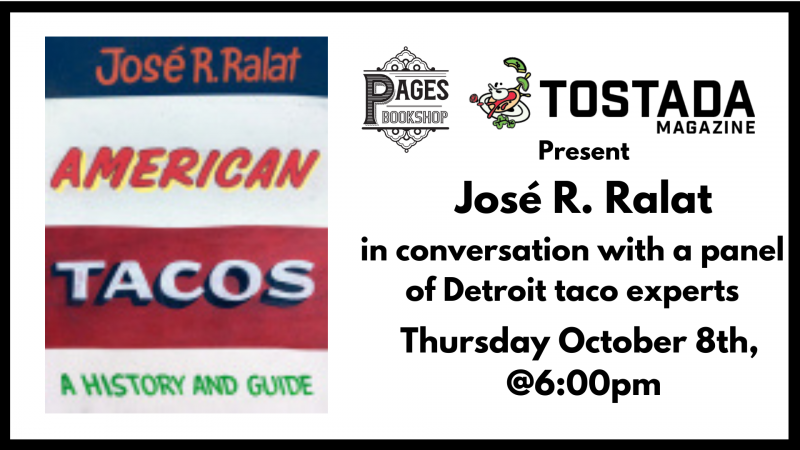 Detroit may be known for its square pizzas, coney dogs, and Vernor's ginger ale, but it's also the epicenter of Michigan's Mexican food world. More than a century after Mexicans began relocating to the Motor City to seek opportunities in the region's booming automotive industry, Detroit's Mexicantown neighborhood is home to hundreds of supermercados, panaderias, generations-old Mexican-American eateries, and of course, dozens of taquerias.

We are thrilled to be partnering with Tostada Magzine to host Texas Monthly Taco Edito José R. Ralat for his new book American Taco. José will be joined by a panel of Detroit's taco experts.

You can register for the event in advance here.

Get your copy of American Tacos here.

Tacos may have been created south of the border, but Americans have made this Mexican food their own, with each style reflective of a time and a place. American Tacos explores them all, taking us on a detailed and delicious journey through the evolution of this dish.

In search of every taco variety from California to Texas and beyond, Ralat traveled from coast to coast and border to border, visiting thirty-eight cities across the country. He examines the pervasive crunchy taco and the new Alta California tacos from chefs Wes Avila, Christine Rivera, and Carlos Salgado. He tastes famous Tex-Mex tacos like the puffy taco and breakfast taco, then tracks down the fry bread taco and the kosher taco. And he searches for the regional hybrid tacos of the American South and the modern, chef-driven tacos of restaurants everywhere. Throughout, he tells the story of how each style of taco came to be, creating a rich look at the diverse taco landscape north of the border. Featuring interviews with taqueros and details on taco paraphernalia and the trappings of taco culture, American Tacos is a book no taco fan will want to take a bite without.

JOSÉ R. RALAT is the taco editor at Texas Monthly and the writer behind the nationally renowned Taco Trail blog. He has written for the Dallas Observer, Texas Highways, D Magazine, Cowboys & Indians, and Eater.