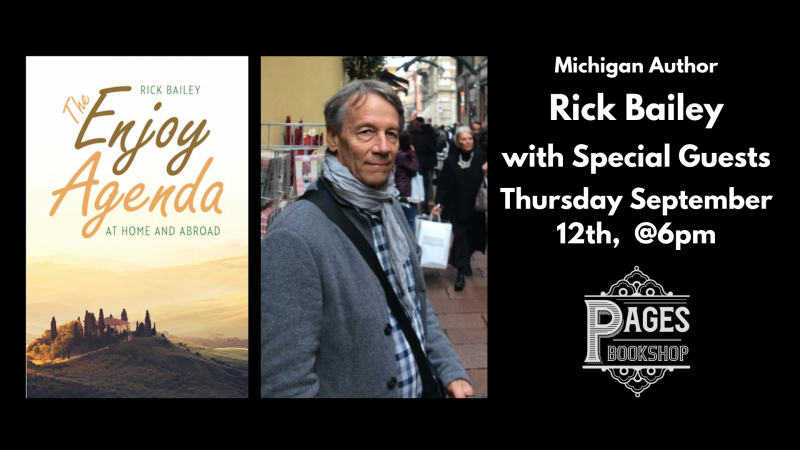 We are excited to have Rick Bailey at Pages for his latest book, "The Enjoy Agenda: At Home and Abroad" which is a part memoir and part travelogue. Rick will be joined by special guest authors Joy Gaines-Friedler and Nancy Owen Nelson. All three authors will be reading from their respective works.

This event is free and open to the public. Rick, Joy, and Nancy's books will before sale before and after the event.

About The Enjoy Agenda:

Part memoir, part travelogue, The Enjoy Agenda takes readers from Rick Bailey’s one-stoplight town in Michigan farm country to Stratford, England, to the French Concession in Shanghai, the Adriatic coast of Italy, and to a small village in the Republic of San Marino. With his self-deprecating style, Bailey recalls the traumas of picture day in elementary school and lugging a guitar to the Cotswalds and back. He reflects on food safety in China, relives a dental emergency in Venice, and embarks on a quest for il formaggio del perdono (the cheese of forgiveness) in the hills above the Adriatic.

Bailey, whose voice is a combination of Dave Barry and Rick Steves with just a soupçon of Montaigne, writes with humor and wit about how these experiences reflect the issues and conflicts of contemporary American life: environmental change, life in digital times, and the vicissitudes of arriving at ripe old age. Throughout The Enjoy Agenda Bailey asks, “Where am I and how did I get here?” a question less about geography than the difficulties and gifts of becoming a husband and ultimately a partner changed and improved by a very smart woman and challenged and delighted by a gradual but seismic culture shift.

RICK BAILEY grew up in Freeland, Michigan, on the banks of the Tittabawassee River. In college, he studied English language and literature and went on to teach writing for 38 years at Henry Ford College. Married to an Italian immigrant, in 41 years of marriage he learned the language and food of Italy. For a number of years he led excursions to Rome, Florence, and Venice, slow travel tours focused on local culture and heroic eating. In retirement, he and his wife divide their time between Michigan and the Republic of San Marino.

JOY GAINES-FRIEDLER's works include three books of poetry, Like Vapor, Dutiful Heart and Capture Theory, which is a 2018 Foreword Review Book of The Year Finalist. She is a multiple Pushcart Prize nominee and the winner of the 2016 Margo Lagattuta Poetry Prize. Featured in The Bloomsbury Anthology of Jewish American Poetry and the award-winning Poetry in Michigan in Poetry, Joy has received awards from, among others, Ekphrastic Magazine, The Litchfield Review, Writers Digest, The Patterson Review, The Alan Ginsberg Poetry Award, The Tom Howard Prize, and The Marjorie Wilson Award for Excellence in Poetry. Joy holds an MFA in Creative Writing and teaches for a variety of non-profits in the Detroit area including literary arts programs, social justice programs, and the PCAP – Prison Creative Arts Project through the University of Michigan.

NANCY OWEN NELSON has published articles in several academic journals and anthologies. She is co-editor of "The Selected Letters of Frederick Manfred: 1932-1954" (University of Nebraska Press, 1989) and editor of "Private Voices, Public Lives: Women Speak on the Literary Life" (1995, University of North Texas Press) and "The Lizard Speaks: Essays on the Writings of Frederick Manfred" (the Center for Western Studies, 1998). She has published poetry in the, "What Wildness is this?" (University of Texas Press, March 2007) as well as in the "South Dakota Review" "Lyceum" and "Graffiti Rag," and has creative nonfiction pieces in "Mom's Writing Literary Journal" (Fall, 2008), "Lalitamba" journal, and "Roll: a Collection of Personal Narratives" (Telling Our Stories Press, 2013). Her memoir, "Searching for Nannie B: Connecting Three Generations of Southern Women" came out in 2015. Her two poetry books are "My Heart Wears No Colors (2018) and a "Portals: A Memoir in Verse" (2019).

The Enjoy Agenda: At Home and Abroad (Paperback)

My Heart Wears No Colors (Paperback)