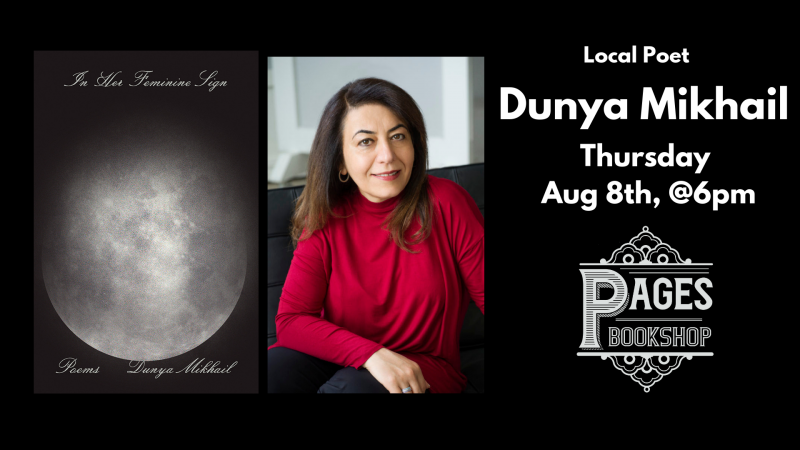 We are thrilled to have local poet Dunya Mikhail back at Pages for her latest poetry collection "In Her Feminine Sign", a poetic exploration of language and gender, place, and time, seen through the mirror of exile.

This event is free and open to the public. Dunya's book will be available for purchase before and after the event.

In Her Feminine Sign follows on the heels of Dunya Mikhail's devastating account of Daesh kidnappings and killings of Yazidi women in Iraq, The Beekeeper. It is the first book she has written in both Arabic and English, a process she talks about in her preface, saying "The poet is at home in both texts, yet she remains a stranger." With a subtle simplicity and disquieting humor reminiscent of Wislawa Szymborska and an unadorned lyricism wholly her own, Mikhail shifts between her childhood in Baghdad and her present life in Detroit, between Ground Zero and a mass grave, between a game of chess and a flamingo. At the heart of the book is the symbol of the tied circle, the Arabic suffix taa-marbuta--a circle with two dots above it that determines a feminine word, or sign. This tied circle transforms into the moon, a stone that binds friendship, birdsong over ruins, three kidnapped women, and a hymn to Nisaba, the goddess of writing. A section of "Iraqi haiku" unfolds like Sumerian symbols carved onto clay tablets, transmuted into the stuff of our ordinary, daily life. In another poem, Mikhail defines the Sumerian word for freedom, Ama-ar-gi, as "what seeps out / from the dead into our dreams."

DUNYA MIKHAIL was born in Baghdad, Iraq, and moved to the United States thirty years later in 1995. After graduating from the University of Baghdad, she worked as a journalist and translator for the Baghdad Observer. Facing censorship and interrogation, she left Iraq, first to Jordan and then to America, settling in Detroit. New Directions published her books The Beekeeper: Rescuing the Stolen Women of Iraq, The Iraqi Nights, Diary of A Wave Outside the Sea, and The War Works Hard--chosen as one the New York Public Library's Books to Remember in 2005--as well as her edited volume, 15 Iraqi Poets. She has received a Guggenheim Fellowship, a Knights Foundation grant, a Kresge Fellowship, and the United Nations Human Rights Award for Freedom of Writing, and works as a special lecturer of Arabic at Oakland University in Michigan.