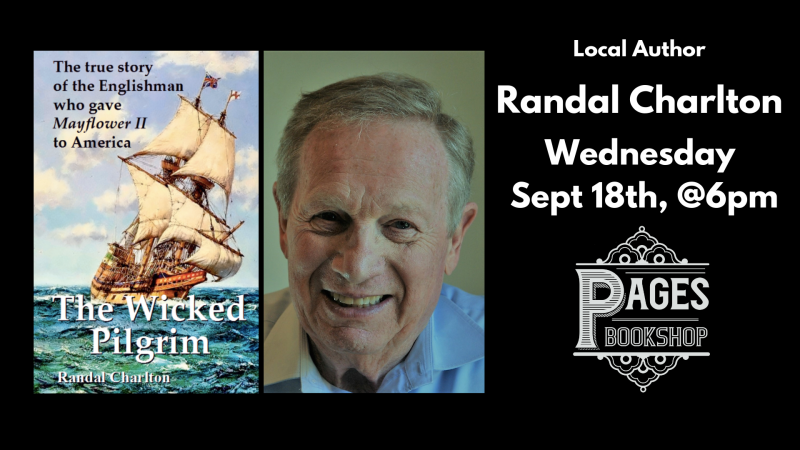 We are thrilled to have journalist and author Randal Charlton at Pages to discuss the incredible story of "The Wicked Pilgrim, the story of the Mayflower II and a biography of Warwick Charlton, the Englishman who in 1955, at a time when he had no financial resources, set out to build a replica of the original Mayflower that would be as accurate as possible “down to the inkwells in the captain’s cabin.”

You surely don't want to miss learning about this fascinating part of history. Randal will be joined by Detroit Free Press journalist, John Gallagher. This event is free and open to the public and books will be sold before and after the event.

About The Wicket Pilgrim:

The Wicked Pilgrim, the true story of the Englishman who gave Mayflower II to America has been released in the US this month, ahead of events that are planned for 2020 to celebrate the 400- year anniversary of the arrival of the first Mayflower on the shores of North America.

How did the ship that was intended as a gift to the American people in 1957 end up as the property of a private company? Who was the Englishman who handed over Mayflower II for the nominal sum of $1? Why, after this generous act, was he no longer welcome anywhere near the ship?

Why did he give the ship away when at the time he owned little else beyond the suit that he wore and an inexpensive wristwatch? What caused the British government to be embarrassed by the Mayflower project? And whose ashes are buried in the bowels of the ship?

Since its arrival 66 years ago over 25 million people have toured the tiny wooden replica of the original Mayflower and millions more have seen the ship on television and film. After decades as a major tourist attraction, Mayflower II needed significant repairs which have been carried out at Mystic Connecticut.

Following the relaunch of Mayflower II at Mystic after a refit that cost millions of dollars, Mayflower II will be readied for public exhibition in Boston in the Spring of 2020. Then in May, it will sail to Plymouth where the first of millions of visitors are expected to be waiting to get on board.

RANDAL CHARLTON has a long and varied career in journalism and business. In 2011 he was a winner of a national Purpose Prize in the USA  for his work in helping to rebuild the Detroit economy. In 2007 he won the National Heimlich award for medical research. He has  been recognized as an Entrepreneur of the Year and won three national prizes in the UK for technical journalism.

Randal  has given numerous talks about the valuable contribution that older adults can make to economic growth including a TED talk about the importance of confidence in business success. Aside from his lifelong interest in journalism, Randal has been CEO of two public companies and confesses to being a serial entrepreneur. He lived the first half of his life in England and moved to the United States in 1987, bringing with him a passion for education that he shares with his father, the subject of this biography.

For the last twenty years Randal has made Michigan his home and worked in Detroit, a city that he loves. He has had close ties with Wayne State University since 2000 when he set up a life sciences company on the university campus. From 2007  to 2011 he was executive director of Techtown the university business incubator. He is currently a trustee of the Hannan Foundation, a non- profit on Woodward that has the mission of helping older adults age in place.