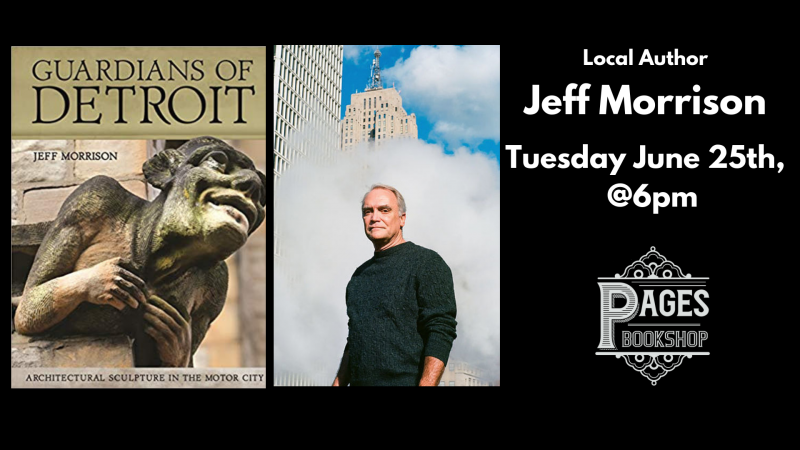 We are excited to have local author Jeff Morrison at Pages to discuss his book "Guardians of Detroit" published by our local publisher, Wayne State University Press. If you are into architecture, you won't want to miss Jeff speak about the incredible architectural sculpture—a host of gargoyles, grotesques, and other silent guardians that watch over the city from on high!

This event is free and open to the public so we hope you will join us. Jeff's books will be for sale before and after this event.

About Guardians of Detroit:

Detroit is home to amazing architectural sculpture—a host of gargoyles, grotesques, and other silent guardians that watch over the city from high above its streets and sidewalks, often unnoticed or ignored by the people passing below. Jeff Morrison’s Guardians of Detroit: Architectural Sculpture in the Motor City documents these incredible features in a city that began as a small frontier fort and quickly grew to become a major metropolis and industrial titan.

Detroit developed steadily following its founding in 1701. From 1850 to 1930 it experienced unprecedented population growth, increasing from 21,019 to over 1,500,000 people. A city of giants, Detroit became home to people of towering ambition and vision who gained wealth and sought to leave their mark on the city they loved. This aspiration created a massive building boom during a time when architectural styles favored detailed ornamentation, resulting in a collection of architectural sculpture unmatched by any other U.S. city. Guardians of Detroit is a first-of-its-kind project to explore, document, and explain this singular collection on a building-by-building basis and to discover and share the stories of these structures and the artists, artisans, and architects who created them. Using a 600-millimeter lens and 23-megapixel camera, Morrison brings sculptural building details barely visible to the naked eye down from the heights, making them available for up-close appreciation. The photos are arranged in a collage format that emphasizes the variety of and relationships between each building’s sculptural ornamentation. Well-researched text complements the photography, delving into the lives of those who created these wonderful works of architectural art.

Guardians of Detroit is an extended love letter to the historic architecture of a city that would become the driving force of America’s industrial and economic power. Fans of art, architecture, and hidden gems will love poring over these pages.

JEFF MORRISON is a historian and photographer who has been taking pictures since his parents gave him his first camera at age nine. He has a bachelor’s degree in history and art from Eastern Michigan University and over thirty years’ experience as a graphic artist. Jeff lives in Oxford, Michigan, with his lovely wife, Susie, and their wonder dog, Manfred. You can learn more on his website: https://www.guardiansofdetroit.com/.