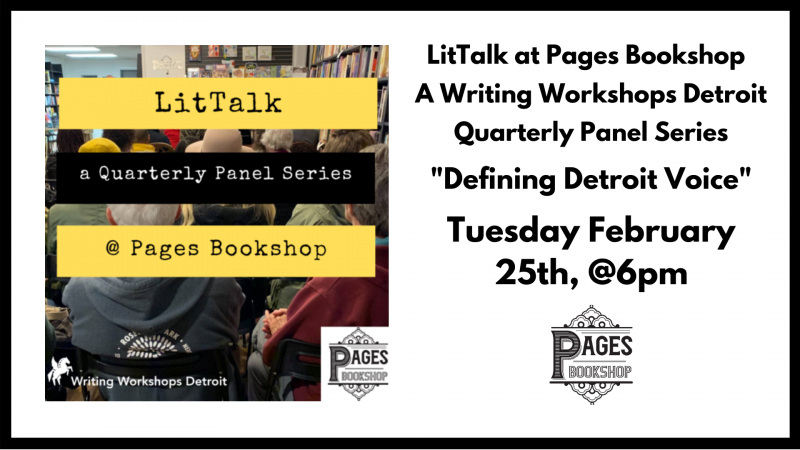 We are excited to co-host with Writing Workshops Detroit another LitTalk at the bookshop. The discussion theme will be defining Detroit Voice. A mix of panelists will discuss Detroit's literary signature, past and present.

This panel will celebrate Detroit’s voice past and present as well as its unique resources, and critically look at assumptions and stereotypes Detroit writers face in a time of change and inequity. We would love for you to join us and join in the conversation!

This event is free and open to the public. All are welcome.

More about our panelists:

NANDI COMER has received fellowships from Kresge Arts in Detroit, Virginia Center for the Arts, Cave Canem, and Callaloo. Her poems and essays have appeared or are forthcoming in Crab Orchard Review, and Prairie Schooner Review. She is the author of American Family: A Syndrome (Finishing Line Press, 2018) and her debut collection, Tapping Out, will be out in May on Northwestern University Press.

TARIQ LUTHUN is a Detroit-born Palestinian community organizer, data analyst, and Emmy Award-winning poet. He earned his MFA in Poetry from the Program for Writers at Warren Wilson College. Luthun currently serves as Editor of the Micro Department at The Offing, and his work has appeared in Vinyl Poetry, Lit Hub, Mizna, Winter Tangerine Review, and Button Poetry, among other credits. His first collection of poetry, "HOW THE WATER HOLDS ME," was awarded Editors' Selection by Bull City Press and is set to release in April 2020.

JUSTIN ROGERS is a Black Detroit poet advocating for growth of all kinds through the Literary Arts. Rogers recently released his chapbook 'Black, Matilda' through Glass Poetry press. He also coordinates programming with InsideOut Literary Arts and is Literary Outreach Coordinator with Poets & Writers.

TONI CUNNINGHAM is a local screenwriter and filmmaker. In 2018 she was awarded a Kresge Arts in Detroit Fellowship for her accomplishments in screenwriting. She previously worked as a script analyst in New York City for many high-profile screenwriting competitions and production companies, including Meryl Streep’s The Writers Lab, BlueCat Screenplay Competition, and Goldcrest Films Production Company. She has written 7 short screenplays, 1 pilot and is currently developing 2 feature length screenplays. She recently directed her first short film titled, Good Grief and is in pre-production on what will be her second film You’re Not There Yet. She is an active member in the community and her dedication can be seen through her membership in many film and writing focused organizations such as Final Girls and Detroit Writers Collective which she helped to organize along with other local writers. Toni can also be found teaching in the Entertainment Arts Department of College for Creative Studies.

ROSE GORMAN is the Resident Fellow for The Tuxedo Project, a community-based literary center in Detroit, and the Louder Than a Bomb Poetry Festival Coordinator at InsideOut Literary Arts. Her writing has appeared in Six Little Things, The Bridge, Paste Magazine, and elsewhere. Over the past decade, Rose has facilitated writing groups for youth and adults, including formerly homeless veterans, recent immigrants, incarcerated men at Rikers Island Correctional Facility and the Detroit Reentry Center, and LGBTQ+ homeless youth and elders. Rose is a member of the the 808 Writers Collective, a residency for queer writers of color.

BRITTANY ROGERS is a poet, mother, educator, and Hufflepuff Head of House. She is currently a reader for Muzzle Magazine, and has work published in Vinyl Poetry and Prose, Freezeray Poetry, Tinderbox Poetry, and The BreakBeat Poets: Black Girl Magic Anthology. Brittany has been nominated for Best New Poets and a Pushcart Prize, and is also a fellow of VONA/ Voices, The Watering Hole, Poetry Incubator, and Pink Door Writing Retreat. Additionally, she is co-creator of A Real Poetry Unit, which brings professional development to Chicago and Detroit educators.

LOUIS AGUILAR, a Kresge Literary Arts Fellow, reports the epic nature of his native city for The Detroit News. He is the author of Long Live the Dead: The Accidental Mummies of Guanajuato, a book about a Mexican city’s complex relationship with 112 of its mummified citizens.

About LitTalk at Pages Bookshop:

LitTalk at Pages Bookshop is a quarterly panel series led by Writing Workshops Detroit and hosted by Pages Bookshop. Each panel session will be led by a moderator and feature authors who reside in the Detroit area. LitTalk panelists will discuss a variety of subjects on writing, publishing, and the book industry, and will take questions from the audience. Author's books will be for sale at each event. LitTalk at Pages Bookshop hopes to inform and inspire the Detroit writing community and showcase the phenomenal talent and pool of published authors in the area