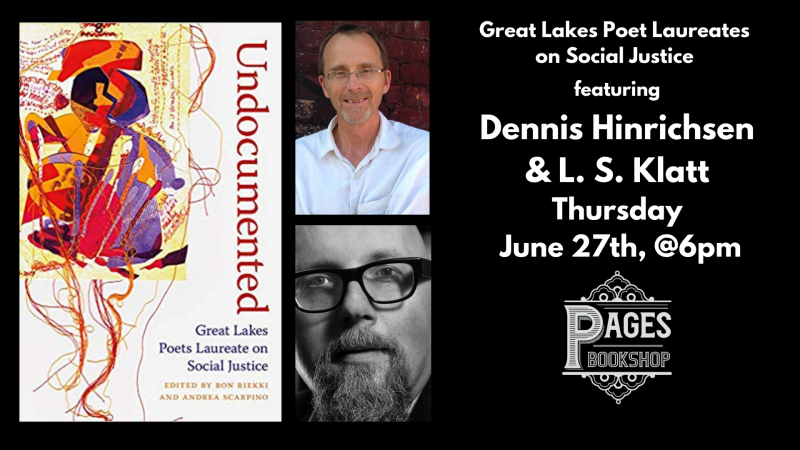 We are thrilled to be hosting Dennis Hinrichsen, one of Detroit's Great Lakes Poet Laureates on Social Justice. Dennis will be joined by Grand Rapids-based laureate L.S Klatt. This event is in partnership with Michigan State University Press and is free and open to the public.

Dennis and L.S. will be reading from the anthology UNDOCUMENTED: GREAT LAKES POETS LAUREATE ON SOCIAL JUSTICE, edited by Ron Riekki and Andrea Scarpino: Dennis Hinrichsen and Roger Nash. This book will be for sale before and after the event.

This event is free and open to the public. This book will be for sale before and after this event.

DENNIS HINRICHSEN's most recent book is Skin Music, winner of the 2014 Michael Waters Poetry Prize. His previous books include Rip-tooth (2010 Tampa Poetry Prize), Kurosawa’s Dog (2008 FIELD Poetry Prize), & Detail from The Garden of Earthly Delights (1999 Akron Poetry Prize). Other awards include the 2015 Rachel Wetzsteon Chapbook Prize from Map Literary for Electrocution, A Partial History as well as the 2016 Third Coast Poetry Prize & a 2014 Best of the Net Award. [q / lear], a chapbook, is forthcoming from Green Linden Press in Fall 2019. From May 2017 - May 2019 he served as the first Poet Laureate of the Greater Lansing Area.

L. S. KLATT'S first collection of poetry, Interloper, won the Juniper Prize, and his second, Cloud of Ink, was awarded the Iowa Poetry Prize. His latest volume, a series of prose poems entitled The Wilderness After Which, came out from Otis Books (Seismicity Editions) in 2017. His poems have appeared widely in magazines and anthologies, includingBest American Poetry, Poetry Daily, Harvard Review, The Believer,Blackbird, The Iowa Review, The Southern Review, and The Common. His essay on the poetics of Wallace Stevens debuted this year in the spring issue of The Georgia Review. Klatt was Poet Laureate of Grand Rapids from 2014-2017. He teaches literature and creative writing at Calvin College.