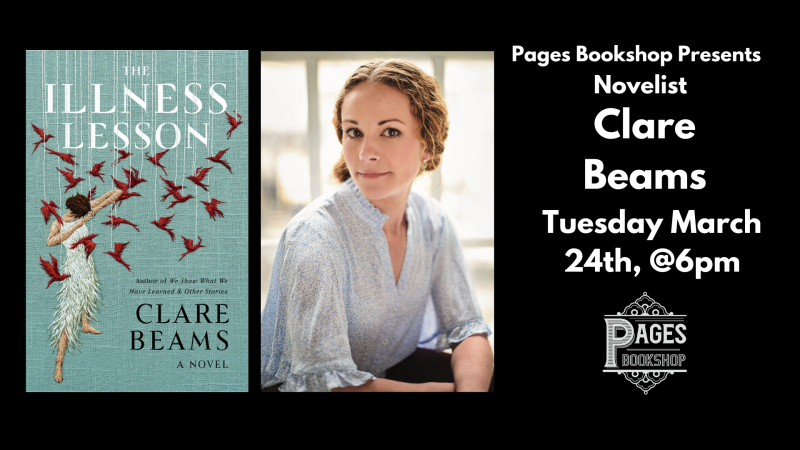 We are excited to have novelist Clare Beams in Detroit for her latest novel "The Illness Lesson", described by Kirkus Review as "A satisfyingly strange novel from the one-of-a-kind Beams." It was named a most anticipated book of 2020 by Time, Vanity Fair, Esquire, O Magazine, Entertainment Weekly, Bustle, BookRiot, Domino, and LitHub. If you're a fan of Margaret Atwood or Octavia Butler, you won't want to miss this book or event.

This event is free and open to the public. Clare's books will be sold before and after the event.

About The Illness Lesson

At their newly founded school, Samuel Hood and his daughter Caroline promise a groundbreaking education for young women. But Caroline has grave misgivings. After all, her own unconventional education has left her unmarriageable and isolated, unsuited to the narrow roles afforded women in 19th century New England.

When a mysterious flock of red birds descends on the town, Caroline alone seems to find them unsettling. But it’s not long before the assembled students begin to manifest bizarre symptoms: Rashes, seizures, headaches, verbal tics, night wanderings. One by one, they sicken. Fearing ruin for the school, Samuel overrules Caroline’s pleas to inform the girls’ parents and turns instead to a noted physician, a man whose sinister ministrations–based on a shocking historic treatment–horrify Caroline. As the men around her continue to dictate, disastrously, all terms of the girls’ experience, Caroline’s body too begins to betray her. To save herself and her young charges, she will have to defy every rule that has governed her life, her mind, her body, and her world.

Clare Beams’s extraordinary debut story collection We Show What We Have Learned earned comparisons to Shirley Jackson, Karen Russell and Aimee Bender, and established Beams as a writer who “creates magical-realist pieces that often calculate the high cost of being a woman” (The Rumpus). Precisely observed, hauntingly atmospheric, as fiercely defiant as it is triumphant, The Illness Lesson is a spellbinding piece of storytelling.

CLARE BEAMS is the author of the story collection We Show What We Have Learned, which won the Bard Prize and was a Kirkus Best Debut of 2016, as well as a finalist for the PEN/Robert W. Bingham Prize, the New York Public Library’s Young Lions Fiction Award, and the Shirley Jackson Award. With her husband and two daughters, she lives in Pittsburgh, where she teaches creative writing, most recently at Carnegie Mellon University and the Pittsburgh Center for the Arts.

The Illness Lesson: A Novel (Hardcover)