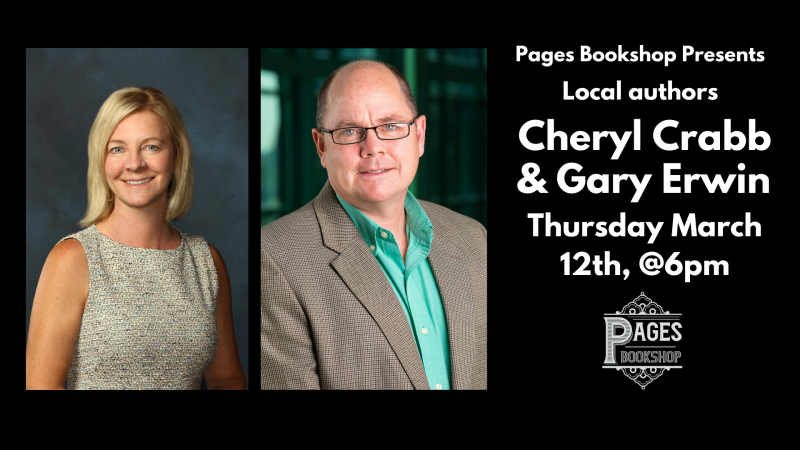 THIS EVENT HAS BEEN CANCELED

We are excited to have local authors, Cheryl Crabb and Gary Erwin in-store to discuss their respective books, "The Other Side of Sanctuary" and "Trail Crossing Sixteen Counties" published by Adelaide Press. Although very different types of books, Cherly's a psychological thriller and Gary's a series of short stories, both are set in Michigan.

This event is free and open to the public. Cheryl and Gary's books will be available for purchase before and after the event.

About The Other Side of Sanctuary:

The Other Side of Sanctuaryis a psychological thriller set in the Sleeping Bear Dunes along Lake Michigan. It’s the story of a young family in crisis and the tensions that arise as a dark series of events unfolds. In contrast to the scenic beauty of their small beach town that fills with summer tourists, Laura and Rob Sanders grapple with a failing business and a dying love. Nothing prepares them for the tragic accident that follows and the harsh revelations that cast them adrift. Laura and Rob search for answers, unaware they’re traveling toward a collision that will either shatter or save their vulnerable family—or maybe both.

A boy who fantasizes about Playboy models while his mother recuperates from a serious heart ailment, a grandmother who takes target practice with a nickel-plated .38 caliber revolver in her crowded apartment building in a Detroit suburb, an elderly man who plunges naked into a northern Michigan lake during the late fall while recalling his life, and a police officer who finds a youth murdered under a highway overpass in the wee hours of the morning just outside of the Detroit city limits—these are a few of the stories that comprise Gary James Erwin’s collection of stories, Trail Crossing Sixteen Counties

CHERYL CRABB is a fiction writer and accomplished journalist. She holds an MFA from Vermont College of Fine Arts and a master’s degree from the Medill School of Journalism at Northwestern University. Her work has appeared in various publications, including the Hartford Courant and The Atlanta Journal-Constitution. A Wisconsin native, she now lives with her family in Northville, Michigan. The Other Side of Sanctuary is her debut novel.

GARY JAMES Erwin’s book of short stories, Trail Crossing Sixteen Counties, was published in September by Adelaide Books. His stories, essays and journalism have appeared in many journals and publications, including Red Cedar Review, The Sun, Pebble Lake Review, The MacGuffin, Driftwood Review, Third Wednesday, 3288 Review, Adelaide Literary Magazine and Santa Fe Literary Reviewamong others. His work has earned two Pushcart Prize nominations and has been anthologized in The PrePress Awards Volume II: Michigan Voices. Currently, he is working on a new novel. He lives with his wife, kids and critters in Clarkston, Michigan, and is the associate vice president of Marketing & Communications at University of Detroit Mercy.

The Other Side of Sanctuary (Paperback)