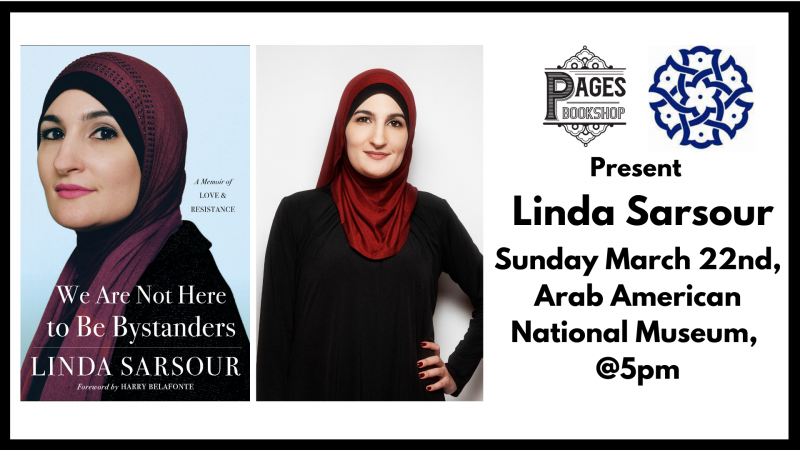 Linda's event will be held in the Annex. An audience Q&A will follow the talk as well as a book signing.

Get your tickets here.

The first 50 attendees who purchase a copy of We Are Not Here to Be Bystanders from Pages will be guaranteed to get their book signed. Please make sure to select the "General Admission with Book - Signing Guaranteed" ticket option.

All books will be available for pickup at the bookstore or at the event.

About We Are Not Here to Be Bystanders:

Linda Sarsour, co-organizer of the Women’s March, shares how growing up Palestinian Muslim American, feminist, and empowered moved her to become a globally recognized activist on behalf of marginalized communities across the country.

On a chilly spring morning in Brooklyn, nineteen-year-old Linda Sarsour stared at her reflection, dressed in a hijab for the first time. She saw in the mirror the woman she was growing to be—a young Muslim American woman unapologetic in her faith and her activism, who would discover her innate sense of justice in the aftermath of 9/11. Now heralded for her award-winning leadership of the Women’s March on Washington, in We Are Not Here to Be Bystanders Linda Sarsour offers a poignant story of community and family.

From the Brooklyn bodega her father owned, where Linda learned the real meaning of intersectionality, to protests in the streets of Washington, DC, Linda’s experience as a daughter of Palestinian immigrants is a moving portrayal of what it means to find one’s voice and use it for the good of others. We follow Linda as she learns the tenets of successful community organizing, and through decades of fighting for racial, economic, gender, and social justice as she becomes one of the most recognized activists in the nation. We also see her honoring her grandmother’s dying wish, protecting her children, building resilient friendships, and mentoring others even as she loses her first mentor in a tragic accident. Throughout, she inspires readers to take action as she reaffirms that we are not here to be bystanders.

In his foreword to the book, Harry Belafonte writes of Linda, “While we may not have made it to the Promised Land, my peers and I, my brothers and sisters in liberation can rest easy that the future is in the hands of leaders like Linda Sarsour. I have often said to Linda that she embodies the principle and purpose of another great Muslim leader, brother Malcolm X.”

This is her story.

Linda Sarsour is an award-winning civil rights activist, community organizer, and mother of three. A Palestinian Muslim American born and raised in Brooklyn, New York, she is the former executive director of the Arab American Association of New York and the cofounder of the first Muslim online organizing platform, MPower Change. She is also a founding member of Justice League NYC, a leading force of activists, artists, youth, and formerly incarcerated individuals committed to criminal justice reform through direct action and policy advocacy.

Sarsour served as national cochair of the largest single day protest in US history, the Women’s March on Washington. Named among 500 of the most influential Muslims in the world, she was also cited as one of Fortune’s 50 Greatest Leaders, and featured as one of Time magazine’s 100 most influential people in the world in 2017. She has won numerous awards for her activism, including a Champion of Change award from the Obama Administration. She is a frequent media commentator on issues that affect Muslim communities, Middle East affairs, and criminal justice reform. She is most recognized for her transformative intersectional organizing work and movement building.

We Are Not Here to Be Bystanders: A Memoir of Love and Resistance (Hardcover)