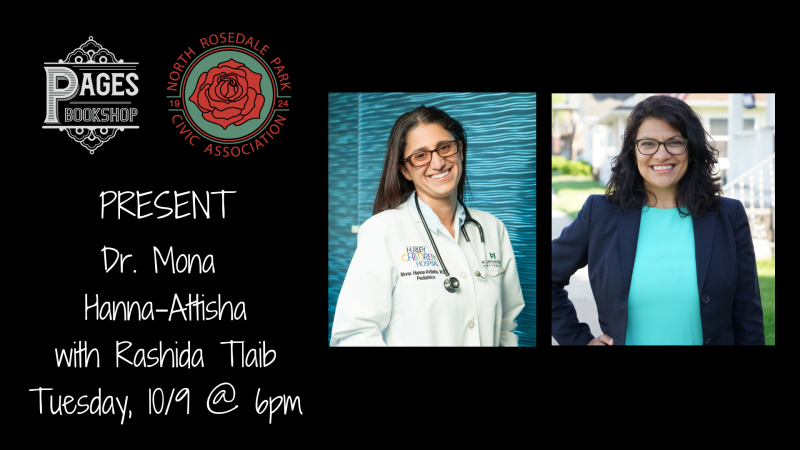 We are excited to host Dr. Mona Hanna-Attisha in our store to discuss her book What the Eyes Don't See. Dr. Mona will be joined by future congresswoman, Rashida Tlaib. We will be hosting this event in partnership with the North Rosedale Park Civic Association at their Community House. The address is 18445 Scarsdale, Detroit, MI 48223.

Dr. Mona Hanna-Attisha's story is a powerful first-hand account of the Flint water crisis, the signature environmental disaster of our time, and a riveting narrative of personal advocacy.

What the Eyes Don't See grapples with our country’s history of environmental injustice. But it also tells the unique and inspiring personal story of Dr. Mona — an immigrant, a doctor, and a scientist.  Dr. Mona is an Iraqi-American, from a country we have basically been at war with most of her life.  She was raised by dissident scientists whose family roots in social justice buoyed her through the fight for justice in Flint. Her family stories are tightly interwoven in the book, creating a gripping human portrait of advocacy and action.

Flint was already a troubled city in 2014 when the state of Michigan—in the name of austerity—shifted the source of its water supply from Lake Huron to the Flint River. Soon after, citizens began complaining about the water that flowed from their taps—but officials rebuffed them, insisting that the water was fine. Dr. Mona Hanna-Attisha, a pediatrician at the city’s public hospital, took state officials at their word and encouraged the parents and children in her care to continue drinking the water—after all, it was American tap water, blessed with the state’s seal of approval.

But a conversation at a cookout with an old friend, leaked documents from a rogue environmental inspector, and the activism of a concerned mother raised red flags about lead—a neurotoxin whose irreversible effects fall most heavily on children. Even as circumstantial evidence mounted and protests grew, Dr. Mona knew that the only thing that could stop the lead poisoning was undeniable proof—and that to get it, she’d have to enter the fight of her life.

What the Eyes Don’t See is the inspiring story of how Dr. Mona—accompanied by an idiosyncratic team of researchers, parents, friends, and community leaders—proved that Flint’s kids were exposed to lead and then fought her own government and a brutal backlash to expose that truth to the world. Paced like a scientific thriller, this book shows how misguided austerity policies, the withdrawal of democratic government, and callous bureaucratic indifference placed an entire city at risk. And at the center of the story is Dr. Mona herself—an immigrant, doctor, scientist, and mother whose family’s activist roots inspired her pursuit of justice.

Dr. Mona Hanna-Attish will be in conversation with future congresswoman, Rashida Tlaib. Rashida served in Michigan House for six years and as a policy staffer for House Majority Floor Leader prior to her election in 2008.

DR. MONA HANNA-ATTISHA is a physician, scientist, and activist who has been called to testify twice before the United States Congress, awarded the Freedom of Expression Courage Award from PEN America, named to Time 100, and has attracted an army of allies across the country.

RASHIDA TLAIB served three terms, rising to the Democratic Chair of the House Appropriations Committee, where she restored and secured millions of dollars for free health clinics, lead abatement, Meals on Wheels programs for seniors, before and after-school programs, and education funding. She authored laws to protect homeowners from fraudulent mortgage bankers and tax preparers and to stop scrap metal thieves from looting Detroit’s abandoned homes and even destroying occupied properties. She was named Legislator of the Year by the Michigan Association of Police Chiefs and After School Champion Award for her work in the Michigan House. Rashida's roots are in Detroit, where she graduated from Detroit Public Schools, is the eldest of 14 and the daughter of Palestinian immigrants.

What the Eyes Don't See: A Story of Crisis, Resistance, and Hope in an American City (Hardcover)