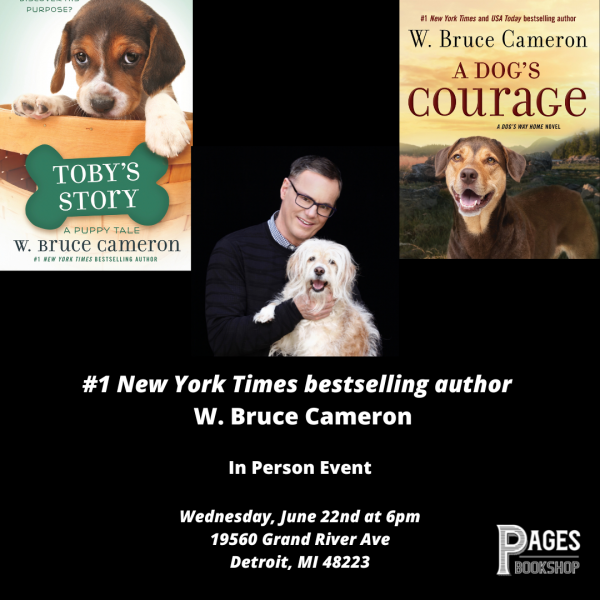 This is a perfect family event to start your summer! W. Bruce Cameron will discuss two books, A Dog's Courage and Toby's Story:

#1 New York Times bestselling author W. Bruce Cameron once again captures the bravery and determination of a very good dog in the gripping sequel to A Dog’s Way Home, the acclaimed novel that inspired the hit movie!

Bella was once a lost dog, but now she lives happily with her people, Lucas and Olivia, only occasionally recalling the hardships in her past. Then a weekend camping trip turns into a harrowing struggle for survival when the Rocky Mountains are engulfed by the biggest wildfire in American history. The raging inferno separates Bella from her people and she is lost once more.

Alone in the wilderness, Bella unexpectedly finds herself responsible for the safety of two defenseless mountain lion cubs. Now she’s torn between two equally urgent goals. More than anything, she wants to find her way home to Lucas and Olivia, but not if it means abandoning her new family to danger. And danger abounds, from predators hunting them to the flames threatening at every turn.

Can Bella ever get back to where she truly belongs?

A Dog’s Courage is more than a fast-paced adventure, more than a devoted dog’s struggle to survive, it’s a story asking that we believe in our dogs as much as they believe in us.

Meet Toby―a very special dog with a very important purpose―featured in A Dog's Journey, the basis for the major motion picture! Young readers will love this story in the popular A Dog's Purpose Puppy Tales series by bestselling author W. Bruce Cameron.

Toby is a beagle who doesn’t seem to have a purpose. While all of his littermates are adopted right away, Toby is left behind because he's not as energetic as they are. But because he is so quiet, he is adopted by a girl named Mona and her mother, who works at a nursing home. As Toby comforts the residents of the home, he discovers that his purpose may be the most important of all!

Toby’s Story is another uplifting tale of the bond that exists between humans and their cherished animal companions. Young fans of Ellie’s Story, Bailey’s Story, Molly’s Story, and Max’s Story will welcome this new addition to the bestselling series. Includes heartwarming illustrations by Richard Cowdrey and a reading and discussion guide at the end of the book.

W. Bruce Cameron is a #1 New York Times and #1 USA Today bestselling author, columnist, and screenwriter. Cameron is most famous for his novel A Dog's Purpose, which spent 63 weeks on the New York Times bestseller list. The book is the basis for the movie version starring Dennis Quaid, Peggy Lipton, and Pooch Hall. A Dog's Purpose is followed by a sequel called A Dog's Journey, which W. Bruce Cameron, along with Cathryn Michon, adapted into a film of the same name. His books have been translated into over 60 languages.