Did You Hear What Eddie Gein Done? (Hardcover) 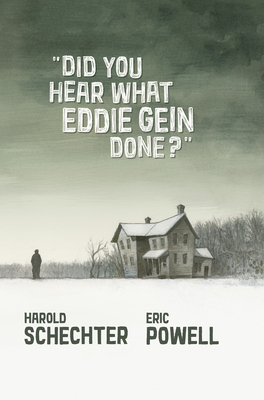 “It is fantastic! Not only is Eric Powell's art on point, but Harold Schechter introduces some new ideas about Ed Gein that have never been heard.” - THE LAST PODCAST ON THE LEFT

“A natural choice for true-crime fans.”―BOOKLIST

“As extensively researched as the Alan Moore/Eddie Campbell Jack the Ripper graphic novel From Hell, ”Did You Hear What Eddie Gein Done?” is a masterpiece of the form, standing as the best possible dramatization of Ed Gein's tale in any medium.”―BLOODY DISGUSTING

“This is a new true crime comics essential.”―SYFY WIRE

One of the greats in the field of true crime literature, Harold Schechter (Deviant, The Serial Killer Files, Hell's Princess), teams with five-time Eisner Award-winning graphic novelist Eric Powell (The Goon, Big Man Plans, Hillbilly) to bring you the tale of one of the most notoriously deranged serial killers in American history, Ed Gein.

Did You Hear What Eddie Gein Done? is an in-depth exploration of the Gein family and what led to the creation of the necrophile who haunted the dreams of 1950s America and inspired such films as Psycho, The Texas Chainsaw Massacre and The Silence of the Lambs.

Painstakingly researched and illustrated, Schechter and Powell's true crime graphic novel takes the Gein story out of the realms of exploitation and gives the reader a fact-based dramatization of these tragic, psychotic and heartbreaking events. Because, in this case, the truth needs no embellishment to be horrifying.

Eric Powell is a writer and artist from Nashville Tennessee who has contributed work for every major publisher in the comics industry. In 1999 Eric launched his critically acclaimed creator owned series THE GOON. In 2002 Eric Launched ALBATROSS EXPLODING FUNNYBOOKS in an effort to keep the Goon alive when no other publisher wanted it because it was too 'different'. But the readers spoke and the Goon quickly became an indy hit and picked up a diehard cult following. The Goon found a home and a wider audience with DARK HORSE COMICS, but Eric continued to publish creator owned comics through Albatross such as his all ages comic CHIMICHANGA and Rebecca Sugar’s PUG DAVIS. Eric has spent his career creating and promoting the validity and importance of creator owned comics through Albatross and other publishers such as Dark Horse and Image Comics.

In 2016 Eric rededicated himself in earnest to his publishing company, ALBATROSS FUNNYBOOKS, and launched his new fantasy series HILLBILLY, his kid's horror anthology SPOOK HOUSE, as well as other creator owned titles.

Eric has been working in collaboration with acclaimed director David Fincher, Tim Miller, and Blur Studios to bring the Goon to life on the big screen as an animated feature film.