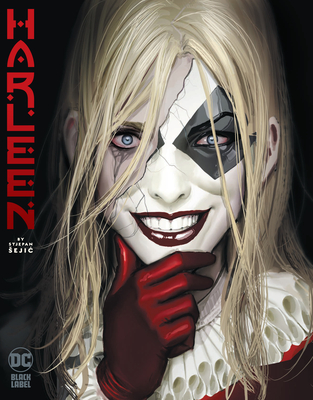 New York Times Bestseller!
Dr. Harleen Quinzel has a theory: mental illness is a survival mechanism. As she seeks to help the broken souls of Gotham City piece together their sanity she will become the one thing she fears the most: one of them. A bold new retelling of the tragic origin of Harley Quinn told through the eyes of the only person who knows her better than anyone: Harleen.

A young psychiatrist with a potential cure for the madness that haunts Gotham City, Dr. Harleen Quinzel must prove her revolutionary theory to a skeptical establishment by delving into the disturbed minds of Arkham Asylum's deadliest inmates. But the more time she spends with her criminally insane subjects, the closer she is drawn to one patient in particular--and the further she falls away from reality. The birth of legendary antihero Harley Quinn and the shocking origins of her twisted romance with the Joker are revealed in Harleen, a stunning new tale of love and obsession written and illustrated by renowned comics storyteller Stjepan Sejic (Aquaman: Underworld, Sunstone).

Collects Harleen #1-3
NOTE: Enhanced cover will only be on first printing copies!

"This is the Harley Quinn story I want to read and the one that we, as thoughtful readers, deserve."--Comics Beat

"...Stjepan Sejic at his absolute best."--ComicBook.com

"A must-read for every fan of Harley Quinn."--Kabooooom!

Stjepan Sejic born November 27, 1981 is a Croatian comic book writer and artist, best known for his work on the Witchblade, The Darkness, and Aquaman among others.

Stjepan's art is very unique in its own way as it is characterized by painting-like graphics which are usually digitally altered with Photoshop and other visual softwares.