Degrees of Fidelity: Essays on Poetry and the Latitudes of the Personal (Paperback) 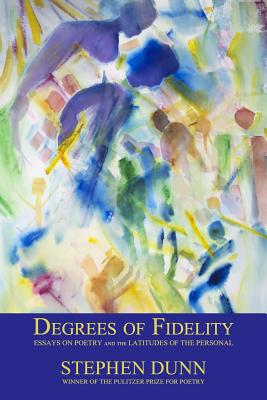 Literary Nonfiction. Poetry. Essays. This is Pulitzer-Prize-winning poet Stephen Dunn's first collection of essays since Walking Light. There comes a time in a poet's development as a writer and as a reader when he or she is more interested in how a poem gets from here to there, and in what formal decisions have been made to achieve this or that effect, than in what the poem means. Or in locating the crossroad moment or moments when a poem could have gone one way, but instead was taken another way, which led to the rightness of a discovery. Such attention will eventually take us to meaning, if meaning is what we're after...The poems to which I'm most drawn deliver the here and now of our existence while being inherently philosophical. If they wander from where they began, as they often do, I know from whence they came, and perhaps how their concealments are connected to their revelations. I want them to engage the heart and the mind simultaneously, and if they move us, it's not necessarily to tears. This book attempts to investigate where we are, how we got there, and where we might arrive if we make the moves that point the way.--Stephen Dunn, from the Introduction.