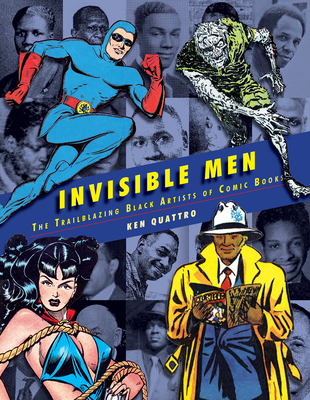 Hear the riveting stories of Black artists who drew--mostly covertly behind the scenes--superhero, horror, and romance comics in the early years of the industry.

The life stories of each man's personal struggles and triumphs are represented as they broke through into a world formerly occupied only by whites. Using primary source material from World War II-era Black newspapers and magazines, this compelling book profiles pioneers like E.C. Stoner, a descendant of one of George Washington's slaves, who became a renowned fine artist of the Harlem Renaissance and the first Black artist to draw comic books. Perhaps more fascinating is Owen Middleton who was sentenced to life in Sing Sing. Middleton's imprisonment became a cause célèbre championed by Will Durant, which led to Middleton's release and subsequent comics career. Then there is Matt Baker, the most revered of the Black artists, whose exquisite art spotlights stunning women and men, and who drew the first groundbreaking Black comic book hero, Vooda!

The book is gorgeously illustrated with rare examples of each artist's work, including full stories from mainstream comic books from rare titles like All-Negro Comics and Negro Heroes, plus unpublished artist's photos. Invisible Men features Ken Quattro's impeccable research and lean writing detailing the social and cultural environments that formed these extraordinary, yet invisible, men!

Ken Quattro and his involvement in comic book history led to his being named an historical consultant on the 2017 Hollywood film, "Professor Marston and the Wonder Women."  Quattro is the author of hundreds of book, magazine, and online articles. He has also provided source material for television programs and many other comics histories. He attended both Eastern Michigan University and the University of Michigan, studying Fine Art and journalism.

"A compelling eye-opener about boundary-breaking stories behind the stories, and winner of a 2021 Eisner Award." —Library Journal

“[Invisible Men] examines the lives of these trailblazers, who paved the way for subsequent generations of illustrators but were invisible to the mainstream in their own time… The stories Mr. Quattro finds aren't always pretty, but the book never shies away from the truth." —The New York Times

“A long neglected chapter of comic book history brought to light by a master scribe!”
—Prof. William H. Foster III, Comic Book Historian and author of Looking For A Face Like Mine

"Invisible Men: The Trailblazing Black Artists of Comic Books by Ken Quattro is both a revelation as well as a memorial to another generation of 'Invisible Men,' in Ralph Ellison’s telling phrase: the book documents an era of talented black creators whose names have been lost to history. The book is a revelation because of the sheer number of talented artists Quattro has discovered, and it's a memorial because of his meticulous research, which he has used to document the lives and accomplishments of a generation of barely to completely unknown black comics artists working in superhero, horror, and romance comics in an overwhelmingly white industry."
—Calvin Reid

"This is the most complete list of Black Golden Age artists I've ever seen, complete with photos and examples of their work.  This is a crucial historical document and I'm glad to have it."
—Reginald Hudlin, Producer/Director

"Invisible Men highlights forgotten yet essential figures in our industry. Bravo to Mr. Quattro for finally giving them their due."
—Keith Knight, Creator of "the K Chronicles" and "Woke"