Slave Species of the Gods: The Secret History of the Anunnaki and Their Mission on Earth (Paperback) 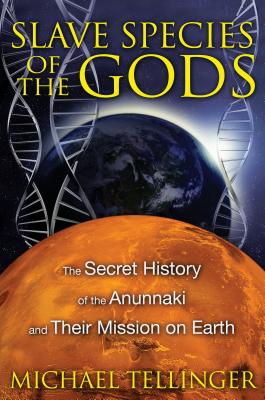 By Michael Tellinger
$25.00
Usually Ships to the store within 7 Days

• Reveals compelling new archaeological and genetic evidence for the engineered origins of the human species, first proposed by Zecharia Sitchin in The 12th Planet

• Shows how the Anunnaki created us using pieces of their own DNA, controlling our physical and mental capabilities by inactivating their more advanced DNA

Scholars have long believed that the first civilization on Earth emerged in Sumer some 6,000 years ago. However, as Michael Tellinger reveals, the Sumerians and Egyptians inherited their knowledge from an earlier civilization that lived at the southern tip of Africa and began with the arrival of the Anunnaki more than 200,000 years ago. Sent to Earth in search of life-saving gold, these ancient Anunnaki astronauts from the planet Nibiru created the first humans as a slave race to mine gold--thus beginning our global traditions of gold obsession, slavery, and god as dominating master.

Revealing new archaeological and genetic evidence in support of Zecharia Sitchin’s revolutionary work with pre-biblical clay tablets, Tellinger shows how the Anunnaki created us using pieces of their own DNA, controlling our physical and mental capabilities by inactivating their more advanced DNA--which explains why less than 3 percent of our DNA is active. He identifies a recently discovered complex of sophisticated ruins in South Africa, complete with thousands of mines, as the city of Anunnaki leader Enki and explains their lost technologies that used the power of sound as a source of energy. Matching key mythologies of the world’s religions to the Sumerian clay tablet stories on which they are based, he details the actual events behind these tales of direct physical interactions with “god,” concluding with the epic flood--a perennial theme of ancient myth--that wiped out the Anunnaki mining operations.

Tellinger shows that, as humanity awakens to the truth about our origins, we can overcome our programmed animalistic and slave-like nature, tap in to our dormant Anunnaki DNA, and realize the longevity and intelligence of our creators as well as learn the difference between the gods of myth and the true loving God of our universe.

Michael Tellinger is a scientist, researcher, and regular guest on more than 200 radio shows in the United States, United Kingdom, and Europe, such as Coast to Coast AM with George Noory and the Shirley Maclaine Show. In March 2011 he hosted the Megalithomania Conference in Johannesburg, South Africa, featuring Graham Hancock, Andrew Collins, and Robert Temple. He lives in South Africa.

“Throughout the ‘educated’ world the idea of ancient alien intervention is pushing serious academics out of their ivory towers. Michael Tellinger is at the forefront, along with Zecharia Sitchin and Erich von Daniken, bringing us information that will eventually change the way we see ourselves and our place in the cosmos. If you think you knew about DNA manipulation, the Anunnaki, or their secret mission on Earth, you need to read this book and take the next step. This is truly an amazing book that has been well researched.”
— Rahasya Poe, Lotus Guide, January 2013

“If you have ever wondered about the age-old questions concerning the human race: Who are we? Where did we come from? Where are we going? Answers may be found in Michael Tellinger’s book Slave Species of the Gods. Clearly written, it’s a fast and gripping read that covers everything from biology, science, and history to religion, mythological gods, and ancient astronauts. Don’t miss this one.”
— Jim Marrs, author of Rule by Secrecy, Alien Agenda, and Crossfire

“Michael Tellinger’s groundbreaking work presents evidence that challenges all the conventional major assumptions about human origins and history. Emerging into our true power and significance cannot happen until we realize we are not the pinnacle of God’s creation, not even among the creatures of this Earth.”
— MíCeál Ledwith, D.D., LL.D., coauthor of The Orb Project

“Even if you don’t agree with the conclusions Michael Tellinger draws from the evidence he presents--and I don’t!--this is a well-researched, well-written, and thought-provoking book on a controversial subject, and I applaud it as a contribution to the debate about the mysterious origins of humanity.”
— Graham Hancock, author of Fingerprints of the Gods