Chevy in the Hole: A Novel (Hardcover) 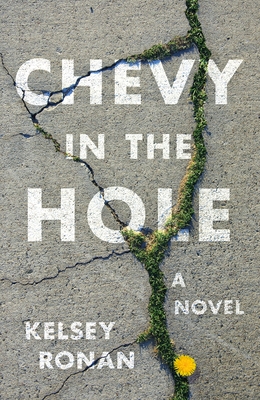 A gorgeous, unflinching love letter to Flint, Michigan, and the resilience of its people, Kelsey Ronan's Chevy in the Hole follows multiple generations of two families making their homes there, with a stunning contemporary love story at its center.

In the opening pages of Chevy in the Hole, August “Gus” Molloy has just overdosed in a bathroom stall of the Detroit farm-to-table restaurant where he works. Shortly after, he packs it in and returns home to his family in Flint. This latest slip and recommitment to sobriety doesn’t feel too terribly different from the others, until Gus meets Monae, an urban farmer trying to coax a tenuous rebirth from the city’s damaged land. Through her eyes, he sees what might be possible in a city everyone else seems to have forgotten or, worse, given up on. But as they begin dreaming up an oasis together, even the most essential resources can’t be counted on.

Woven throughout their story are the stories of their families—Gus’s white and Monae’s Black—members of which have had their own triumphs and devastating setbacks trying to survive and thrive in Flint. A novel about the things that change over time and the things that don’t, Chevy in the Hole reminds us again and again what people need from one another and from the city they call home.

Kelsey Ronan grew up in Flint, Michigan. Her work has appeared in Lit Hub, Michigan Quarterly Review, The Kenyon Review and elsewhere. She lives in Detroit and teaches for InsideOut Literary Arts. Chevy in the Hole is her first novel.

Advance Praise for CHEVY IN THE HOLE

“There is a particular kind of melancholy endemic to cities in the industrial Midwest. Chevy in the Hole does a wonderful job of capturing this kind of melancholy... Ronan adeptly dramatizes one of the most dangerous monsters of addiction: self-loathing... [Gus is] thoughtful in every sense of the word — he’s kind and he thinks too much, and Ronan has a gift for propulsive sentences that make even his deeply interior moments somehow suspenseful and endearing.”
—Dean Bakopoulos, The New York Times Book Review

“[Chevy in the Hole] does a great job at exploring Flint’s very real history of environmental racism... Ronan is a white woman and Monae and her family, who appear throughout the book, are Black... Sometimes non-POC get it completely wrong when trying to create art from the perspective of a culture outside their own... That couldn’t be further from the truth of what Ronan has done with Chevy in the Hole. Ronan has not only done her research but has crafted this love letter to Flint with compassion.”
—Randiah Camille Green, Detroit Metro Times

“[This] debut keeps the city and its history at the heart of the book.”
—The Millions, a "Most Anticipated" Book for March 2022

“As Flint native Ronan’s rich and unflinching saga sways through the twentieth and into the twenty- first century, it reveals a decaying city once at the heart of America’s industrial and cultural identity. The intimate histories in this stunning and masterful debut reveal universal truths of renewal and redemption at individual and societal levels.”
—Booklist (starred review)

“Ronan’s characters brim with resilience, and their survival reflects the highs and lows of the site referenced in the title, a Chevrolet factory left to ruin and later reclaimed as a park. Ronan ably humanizes a city known for the pity it’s elicited for many decades.”
—Publishers Weekly

“A thought-provoking and emotional debut...Labeled as a love letter to Flint, Michigan, this novel portrays the city through the eyes of its residents, its fighters. Chevy in the Hole manages to personalize Flint not with pity but with hope. Ronan is a compelling writer – I highly recommend this complex and beautiful novel.”
—Current Magazine

“Ronan beautifully captures the mood and spirit of the period. Her descriptions of the desolation mixed with the rebirth of certain areas, along with the sounds and smells of life in Flint, are spot on.”
—Bob Campbell, East Village Magazine

“Kelsey Ronan is a storyteller of extraordinary wisdom and empathy, devoted to rendering fully the lives of these remarkable characters—their complexities and frailties, their unexpected kindnesses and terrible mistakes, their resilience in the face of nearly insurmountable obstacles. Grace-filled and elegant, Chevy in the Hole is a testament to the long reach of history, and family, and the salvific power of love. What a joy and honor to read a debut novel of such beauty and reach, one that so gloriously bears witness to the stories of a place and its people.”
—Elizabeth Wetmore, New York Times bestselling author of Valentine

“Chevy in the Hole is undoubtedly a Flint love story, but only for those willing to acknowledge love for what it is: an act of endurance that's often painful, sometimes destructive, and absolutely necessary for survival. Like the city itself, August and Monae struggle to reconcile what they've inherited with what they are, and Kelsey Ronan has the grace to make us understand their fumbles and believe in their restoration.”
—Xhenet Aliu, author of Brass

“Kelsey Ronan is an extraordinary writer -- incisive, compassionate, and surprising -- and her debut novel, Chevy in the Hole, is a fierce and epic examination of the meaning of home, family and the relationships we cherish the most. An unforgettable book by a writer who, lucky for us, is just getting started.”
—Molly Antopol, author of The UnAmericans

“Like the most exciting love stories, Kelsey Ronan’s Chevy in the Hole is a challenge. While the central love story between Gus and Monae is filled with an exquisite push and pull, this book becomes electric because of the romance between Kelsey Ronan and Flint. She makes a city that has so often been made flat by the world around it alive and filled with the potholes and gardens and people that make it, despite all its traumas, bloom.”
—Megan Giddings, author of Lakewood

“Profoundly honest and stunning in scope, Chevy in the Hole is a beautifully written reminder of community strength in the face of extraordinary change. Kelsey Ronan’s voice is simply unforgettable and this debut, an absolute must-read.”
—P. J. Vernon, author of Bath Haus

“Chevy in the Hole is not only about falling in love in a city in crisis, but a love story for the city itself—its haunted past, its yet-to-be-written future, and, most of all, its people. Written with uncommon depth, humor, and generosity of spirit, this is just an extraordinarily good novel. I missed it when it was over.”
—Anna Clark, author of The Poisoned City: Flint's Water and the American Urban Tragedy