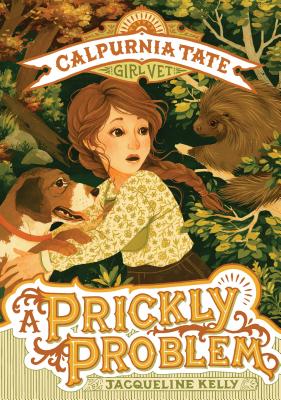 This is book number 4 in the Calpurnia Tate, Girl Vet series.

When the Tate family dog, Ajax, has a run-in with a porcupine, things get prickly—and dangerous—quickly. It'll take Callie's quick thinking and doctoring, along with a little help from Dr. Pritzker, to make things right. Will Ajax learn to leave other critters alone?

From Jacqueline Kelly, the author of the acclaimed books, The Evolution of Calpurnia Tate and The Curious World of Calpurnia Tate, comes a series for younger readers, featuring a smart and spunky heroine and the lushly imagined world of turn-of-the-century Texas.

“Expect a fresh crop of Calpurnia readers to simply enjoy this on its own considerable merits.” —The Bulletin on Skunked!

“This is a great progression from the Lois Lowry books and Laura Ingalls Wilder’s ‘Little House’ books.” —Children's Literature on Skunked!

"This engaging introductory chapter book contains the added benefit of introducing readers to science and nature terminology as well as a bit of Texas history. . . . Entertaining, humorous, and informative." —School Library Journal, starred review on Skunked!

Jacqueline Kelly won the Newbery Honor for her first book, The Evolution of Calpurnia Tate. She was born in New Zealand and raised in Canada, in the dense rainforests of Vancouver Island. Her family then moved to El Paso, Texas, and Kelly attended college in El Paso, then went on to medical school in Galveston. After practicing medicine for many years, she went to law school at the University of Texas, and after several years of law practice, realized she wanted to write fiction. Her first story was published in the Mississippi Review in 2001. She now makes her home with her husband and various cats and dogs in Austin and Fentress, Texas.

Jennifer L. Meyer is an award-winning artist whose work has been featured multiple times in the Best in Contemporary Fantastic Art annual, Spectrum. Born into a fantasy-loving military family, she grew up a big fan of comics, reading, and drawing animals (especially bunnies). Jennifer's art has appeared in comic books, children's books, graphic novels, and other media. She is the illustrator of the Calpurnia Tate, Girl Vet series by Jacqueline Kelly.

“Animal lovers will revel in the abundant anecdotes about the benevolent country vet and Travis' mangy strays—some heart-wrenching, some hilarious—while learning plenty about nature ("from pond water up to the stars"), the deadly 1900 Galveston hurricane, and early Texas history as recounted by Callie's scholarly and beloved Granddaddy. A warm, welcome stand-alone companion to Kelly's lauded debut.” —Kirkus Reviews, starred review on The Curious World of Calpurnia Tate

“Well worth waiting for . . . Readers will flock to this sequel” —Booklist, starred review on The Curious World of Calpurnia Tate

“In her debut novel, Jacqueline Kelly brings to vivid life a boisterous small-town family at the dawn of a new century. And she especially shines in her depiction of the natural world that so intrigues Callie . . . Readers will want to crank up the A.C. before cracking the cover, though. That first chapter packs a lot of summer heat.” —The Washington Post on The Evolution of Calpurnia Tate