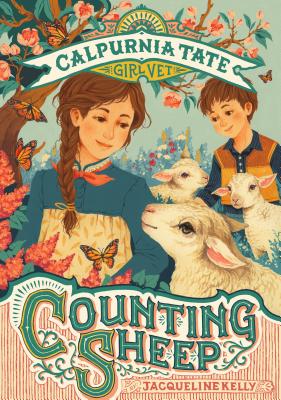 This is book number 2 in the Calpurnia Tate, Girl Vet series.

The character from The Curious World of Calpurnia Tate helps animals big and small in this second book in a chapter book series by a Newbery Honor author.

When Callie and Granddaddy go exploring by the river, Callie discovers a leaf covered with spots. Those spots, it turns out, are eggs, and those eggs become butterflies. One of her newly hatched butterflies has a problem, though—its wing is broken. Can Callie find a way to help this butterfly fly?

Mother's prize sheep, Snow White, is pregnant and about to give birth. With Dr. Pritzker off helping a colicky horse, it falls to Callie to deliver the lamb. Callie takes the situation in hand, bringing the lamb into the world—and getting her fair due from Mother!

Jacqueline Kelly won the Newbery Honor for her first book, The Evolution of Calpurnia Tate. She was born in New Zealand and raised in Canada, in the dense rainforests of Vancouver Island. Her family then moved to El Paso, Texas, and Kelly attended college in El Paso, then went on to medical school in Galveston. After practicing medicine for many years, she went to law school at the University of Texas, and after several years of law practice, realized she wanted to write fiction. Her first story was published in the Mississippi Review in 2001. She now makes her home with her husband and various cats and dogs in Austin and Fentress, Texas.

Teagan White is a freelance illustrator who specializes in intricate drawings of flora and fauna. Originally from Chicago, Teagan now lives and works in Minnesota, where she received a BFA in illustration from the Minneapolis College of Art & Design in 2012. She is the cover artist for the Calpurnia Tate, Girl Vet series by Jacqueline Kelly.

Jennifer L. Meyer is an award-winning artist whose work has been featured multiple times in the Best in Contemporary Fantastic Art annual, Spectrum. Born into a fantasy-loving military family, she grew up a big fan of comics, reading, and drawing animals (especially bunnies). Jennifer's art has appeared in comic books, children's books, graphic novels, and other media. She is the illustrator of the Calpurnia Tate, Girl Vet series by Jacqueline Kelly.

"Expect a fresh crop of Calpurnia readers to simply enjoy this on its own considerable merits." —Booklist

The Curious World of Calpurnia Tate:

“Well worth waiting for . . . Readers will flock to this sequel for the pleasure of revisiting this beloved character and her world.” —Booklist, starred review

“Six years after debuting in Kelly's Newbery Honor-winning The Evolution of Calpurnia Tate, the budding Texas scientist returns, as curious and charming as ever, and now preoccupied with fauna instead of flora.” —Publishers Weekly, starred review

The Evolution of Calpurnia Tate:

“The Evolution of Calpurnia Tate is the most delightful historical novel for tweens in many, many years. …Callie's struggles to find a place in the world where she'll be encouraged in the gawky joys of intellectual curiosity are fresh, funny, and poignant today.” —The New Yorker, "Book Bench" section

“In her debut novel, Jacqueline Kelly brings to vivid life a boisterous small-town family at the dawn of a new century. And she especially shines in her depiction of the natural world that so intrigues Callie . . . Readers will want to crank up the A.C. before cracking the cover, though. That first chapter packs a lot of summer heat.” —The Washington Post on The Evolution of Calpurnia Tate

“Each chapter of this winning . . . novel opens with a quotation from ‘On the Origin of Species'--a forbidden book that her own grandfather turns out to have hidden away. Together they study Darwin's masterpiece, leading to a revolution in Callie's ideas of what she might accomplish on her own.” —New York Times Book Review on The Evolution of Calpurnia Tate