An Elephant in the Garden: Inspired by a True Story (Paperback) 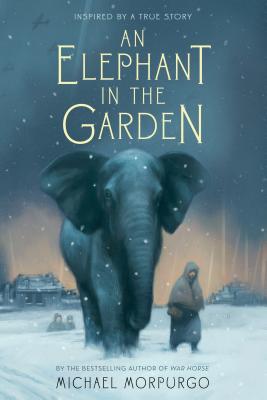 “Confined to her nursing home bed, 82-year-old Lizzie tells an outrageous but true story to Karl and his mother. While awaiting the return of Papi from World War II, 16-year-old Lizzie, her young brother, Karli, and her mother make their garden home to a four-year-old orphaned elephant from the zoo. Dresden, Germany, is sure to be bombed, and the zoo will be forced to kill the larger animals that may pose a threat to the city. Marlene, the adored elephant, breaks loose, beginning a chase that leads them away from Dresden and saves them from warfare. Lizzie's story is laced with details that bring history to life.”
— Jane Morck, Third Place Books, Lake Forest Park, WA

Lizzie and Karl's mother is a zoo keeper; the family has become attached to an orphaned elephant named Marlene, who will be destroyed as a precautionary measure so she and the other animals don't run wild should the zoo be hit by bombs. The family persuades the zoo director to let Marlene stay in their garden instead. When the city is bombed, the family flees with thousands of others, but how can they walk the same route when they have an elephant in tow, and keep themselves safe? Along the way, they meet Peter, a Canadian navigator who risks his own capture to save the family.

As Michael Morpurgo writes in an author's note, An Elephant in the Garden is inspired by historical truths, and by his admiration for elephants, "the noblest and wisest and most sensitive of all creatures." Here is a story that brings together an unlikely group of survivors whose faith in kindness and love proves the best weapon of all.

Michael Morpurgo OBE, is an English author, poet, playwright and librettist, best known for his work in children’s literature. He was the third Children’s Laureate. He has written over 120 books, and has been published in over 25 languages. His children’s novel War Horse has been adapted for stage where it became a smash-hit success in the UK, before transferring to Broadway and Toronto. War Horse has also been adapted for screen, directed by Steven Spielberg and released in 2012.

“Young Lizzie's story (differentiated from the framing tale by typeface change) is quick-paced and moving, and her teenage viewpoint is believable…” —BCCB

“Morpurgo crafts a thought-provoking and perilous encounter with an enemy combatant who joins their party and eventually forges a believable romance with Lizzie.” —Publishers Weekly

“Readers . . . can't help but be drawn into the tale of survival told in An Elephant in the Garden, which is loosely based on a real event from World War II.” —BookPage

“The calm, steady tone is engaging, appropriate, and will appeal to a wide range of readers.” —VOYA

“The occasional interruptions to the story build suspense and add a layer of resonance to Morpurgo's poignant and thoughtful exploration of the terrible impact of war on both sides of the fighting.” —Booklist

“This well-paced, heartwarming narrative by a master storyteller will appeal to readers on several levels…” —School Library Journal

“Morpurgo's (Kensuke's Kingdom) suspenseful, ultimately tragic novel opens as 18-year-old Tommo Peaceful stays up all night ‘to try to remember everything.' ... This is a moving depiction of a loving relationship between two brothers, their lives so linked that readers may wonder until the end whose fate lies in the balance. All in all, a powerful story about war's costs, and who pays the price.” —Publishers Weekly, starred review of Private Peaceful

“This searing World War I novel reveals the unspeakable slaughter of soldiers on all sides fighting against people who are just like them...the viewpoint brings close the fury of the thundering guns, the confusion, and the kindness of enemies who come together in No Man's Land to save the wounded horse.... and the terse details speak eloquently about peace.” —Booklist for War Horse