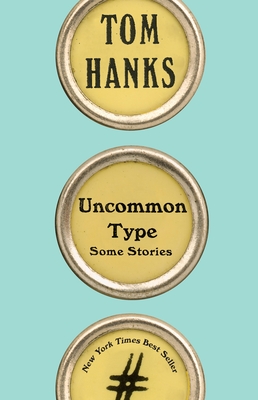 “Wow! Here is a collection of stories that are at times funny, often moving, and really, really good, if not great. 'Welcome to Mars' is perhaps my favorite. It's Kirk's 19th birthday, and he joins his father to go surfing on what turns out to be a defining day in his life. And then there's 'Alan Bean Plus Four,' which is a hilarious telling of four friends' journey to the moon. Read it. You'll be pleasantly surprised by Tom Hanks' writing.”
— Randy Schiller, Left Bank Books, Saint Louis, MO

A collection of seventeen wonderful short stories showing that two-time Oscar winner Tom Hanks is as talented a writer as he is an actor.

A gentle Eastern European immigrant arrives in New York City after his family and his life have been torn apart by his country's civil war. A man who loves to bowl rolls a perfect game--and then another and then another and then many more in a row until he winds up ESPN's newest celebrity, and he must decide if the combination of perfection and celebrity has ruined the thing he loves. An eccentric billionaire and his faithful executive assistant venture into America looking for acquisitions and discover a down and out motel, romance, and a bit of real life. These are just some of the tales Tom Hanks tells in this first collection of his short stories. They are surprising, intelligent, heartwarming, and, for the millions and millions of Tom Hanks fans, an absolute must-have!

TOM HANKS has been an actor, screenwriter, director and, through Playtone, a producer.  His writing has appeared in The New York Times, Vanity Fair, and The New Yorker.  This is his first collection of fiction.

“It turns out that Tom Hanks is also a wise and hilarious writer with an endlessly surprising mind. Damn it.”
—Steve Martin

“The central quality to Tom’s writing is a kind of poignant playfulness. It’s exactly what you hope from him, except you wish he were sitting in your home, reading it aloud to you, one story at a time.”
—Mindy Kaling

“Mr. Hanks turns out to be as authentically genuine a Writer with as capital a W as ever touched a typewriter key. The stories in UNCOMMON TYPE range from the hilarious to the deeply touching. They move in period, location and manner, but all demonstrate a joy in writing, a pleasure in communicating an intensely American sense of atmosphere, friendship, life and family that is every bit as smart, engaging and humane as the man himself. All with that extra quality of keenly observant and sympathetic intelligence that has always set Tom Hanks apart. I blink, bubble and boggle in amazed admiration.”
—Stephen Fry

“Uncommon Type is funny, wise, gloriously inventive and humane. Tom Hanks sees inside people – a wary divorcee, a billionaire trading desire for disaster, a boy witnessing his father’s infidelity, a motley crew shooting for the moon – with such acute empathy and good humour we’d follow him anywhere. The cumulative effect is of a world I didn’t want to leave.”
—Anna Funder

“Reading Tom Hanks's Uncommon Type is like finding out that Alice Munro is also the greatest actress of our time.”
—Ann Patchett

“Seventeen wide-ranging and whimsical stories—with a typewriter tucked into each one. Only one of the stories in Hanks' debut features an actor: it's a sharp satire with priceless insider details about a handsome dope on a press junket in Europe. The other 16 span a surprisingly wide spectrum...Hanks can write the hell out of typing, and his dialogue is excellent, too. Has he read William Saroyan? He should. While these stories have the all-American sweetness, humor, and heart we associate with his screen roles, Hanks writes like a writer, not a movie star.”
—Kirkus Reviews

“Uncommon Type offers heartfelt charm along with nostalgia for sweeter, simpler times — even if they never really were quite so sweet or simple… Even when Hanks writes about somber subjects like the durable distress of combat or the high stakes for immigrants fleeing persecution, he finds a sweet spot.”
—NPR

“Ultimately if you like Tom Hanks — and who doesn’t? — you will enjoy Uncommon Type.”
—AM New York

“In Uncommon Type, Hanks proves his bona fides as a serious scribe, producing a collection of 17 short stories so accomplished and delightful he can rest assured he has a great fallback plan should that acting thing, you know, not work out… Terrific, Tom.”
—USA Today

“There is often a powerful sense of other lives imagined at a level that goes deeper than writerly research.”
—The Guardian

“Enjoyable..."The Past Is Important to Us” employs a sharp, unexpected conclusion to elevate a story of time travel and romance at the 1939 World’s Fair."
—Publisher's Weekly


“They’re all beautifully written and full of heart.”
—Sunday Mirror, The People

“Hanks can write. These pieces, some of which feature recurring characters and many of which explore the classic American short story territory of small-town life, have the authentic, worn-in feel of a favourite pair of jeans.”
—Metro

“The great strengths of this collection are decency and sentimentality.”
—Sunday Times

“An entertaining collection.”
—Mail on Sunday

“There always comes a slight wariness when we discover that someone who is generally renowned for one thing turns out to be very good at something else... But what makes Uncommon Type even harder to dismiss is the silky-smooth momentum and unforced hum that Hanks' writing glides along with here.”
—Irish Independent

“All American life is here... Delightful... Hanks’s prose is impressive, with a strong voice and stylistic flair…. so fluent, convincing and confident that you forget it belongs to Tom Hanks, movie star. He's just a writer. And he’s going to write a great novel one day.”
—The Times

“[Unveil[s] the inventive mind behind his regular-guy façade”.
—Daily Telegraph

“Tom Hanks is a natural born storyteller… He Belongs to a tradition of American storytellers that includes Mark Twain or O Henry although there is a range of work in Uncommon Type that defies such a catch-all definition.”
—The Herald