Learning to Die: Wisdom in the Age of Climate Crisis (Paperback) 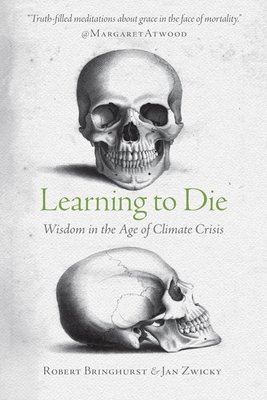 In this powerful little book, two leading intellectuals illuminate the truth about where our environmental crisis is taking us. Writing from an island on Canada's Northwest coast, Robert Bringhurst and Jan Zwicky weigh in on the death of the planet versus the death of the individual. For Zwicky, awareness and humility are the foundation of the equanimity with which Socrates faced his death: he makes a good model when facing the death of the planet, as well as facing our own mortality. Bringhurst urges readers to tune their minds to the wild. The wild has healed the world before, and it is the only thing that stands any chance of healing the world now - though it is unlikely to save Homo sapiens in the process.

Robert Bringhurst trained initially in the sciences at MIT but has made his career in the humanities. He is revered for his translations from Haida and other Native American languages and his studies of cultural history. He is also an Officer of the Order of Canada and a former Guggenheim Fellow in poetry. Two Canadian universities have awarded him honorary doctorates. He lives on Quadra Island, B.C. Jan Zwicky is a Governor General Award winning poet and a philosopher. She earned her Ph.D. in philosophy from the University of Toronto and has taught at a number of North American institutions, including Princeton and the University of Alberta. In the 1980s and '90s, she developed the first courses in environmental philosophy offered in Canadian universities. He lives on Quadra Island, B.C.