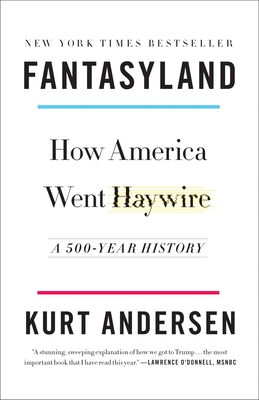 How did we get here?

In this sweeping, eloquent history of America, Kurt Andersen shows that what’s happening in our country today—this post-factual, “fake news” moment we’re all living through—is not something new, but rather the ultimate expression of our national character. America was founded by wishful dreamers, magical thinkers, and true believers, by hucksters and their suckers. Fantasy is deeply embedded in our DNA.

Over the course of five centuries—from the Salem witch trials to Scientology to the Satanic Panic of the 1980s, from P. T. Barnum to Hollywood and the anything-goes, wild-and-crazy sixties, from conspiracy theories to our fetish for guns and obsession with extraterrestrials—our love of the fantastic has made America exceptional in a way that we've never fully acknowledged. From the start, our ultra-individualism was attached to epic dreams and epic fantasies—every citizen was free to believe absolutely anything, or to pretend to be absolutely anybody. With the gleeful erudition and tell-it-like-it-is ferocity of a Christopher Hitchens, Andersen explores whether the great American experiment in liberty has gone off the rails.

Fantasyland could not appear at a more perfect moment. If you want to understand Donald Trump and the culture of twenty-first-century America, if you want to know how the lines between reality and illusion have become dangerously blurred, you must read this book.

“This is a blockbuster of a book. Take a deep breath and dive in.”—Tom Brokaw

“A frighteningly convincing and sometimes uproarious picture of a country in steep, perhaps terminal decline that would have the founding fathers weeping into their beards.”—The Guardian

Kurt Andersen is the bestselling author of Evil Geniuses, Fantasyland and the novels True Believers, Heyday andTurn of the Century, among other books. He contributes to The New York Times and was host and co-creator of Studio 360, the Peabody Award–winning public radio show and podcast. He also writes for television, film, and the stage. Andersen co-founded Spy magazine, served as editor in chief of New York, and was a cultural columnist and design critic for Time, New York and The New Yorker. He graduated from Harvard College and lives in Brooklyn.

“With this rousing book, [Kurt] Andersen proves to be the kind of clear-eyed critic an anxious country needs in the midst of a national crisis.”—San Francisco Chronicle

“A frighteningly convincing and sometimes uproarious picture of a country in steep, perhaps terminal decline that would have the founding fathers weeping into their beards.”—The Guardian

“A spirited, often entertaining rant against things as they are.”—Kirkus Reviews

“A provocative new study of America’s cultural history . . . In this absorbing, must-read polemic, Andersen exhaustively chronicles a development eating away at the very foundation of Americanism.”—Newsday

“A staggering amount of research that’s both compelling and totally unnerving.”—The Village Voice

“A stunning, sweeping explanation of how we got to Trump . . . the most important book that I have read this year.”—Lawrence O’Donnell, MSNBC

“This is a blockbuster of a book. Kurt Andersen is a dazzling writer and a perceptive student of the many layers of American life. Take a deep breath and dive in.”—Tom Brokaw

“This is an important book—the indispensable book—for understanding America in the age of Trump. It’s an eye-opening history filled with brilliant insights, a saga of how we were always susceptible to fantasy, from the Puritan fanatics to the talk-radio and Internet wackos who mix show business, hucksterism, and conspiracy theories. Even the parts you think you know already are put into an eye-opening context.”—Walter Isaacson, #1 New York Times bestselling author of Leonardo da Vinci

“Kurt Andersen is America’s voice of reason. What is he—Canadian? The people who should read this book won’t—because it’s a book—but reality-based citizens will still get a kick out of this winning romp through centuries of American delusion.”—Sarah Vowell

“Fantasyland presents the very best kind of idea—one that, in retrospect, seems obvious, but that took a seer like Kurt Andersen to piece together. The thinking and the writing are both dazzling; it is at once a history lesson and an oh-so-modern cri de coeur; it’s an absolute joy to read and will leave your brain dancing with excitement long after you’re done.”—Stephen Dubner