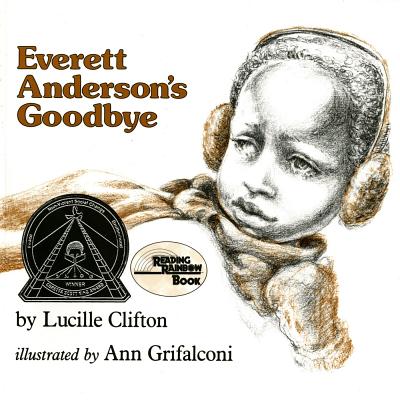 Everett Anderson's Goodbye is a touching portrait of a little boy who is trying to come to grips with his father's death. Lucille Clifton captures Everett's conflicting emotions as he confronts this painful reality. We see him struggle through many stages, from denial and anger to depression and, finally, acceptance. In this spare and moving poem, the last in this acclaimed series, Lucille Clifton brings Everett Anderson's life full circle.

Everett Anderson's Goodbye is the winner of the 1984 Coretta Scott King Author Award.

Ann Grifalconi, a native New Yorker, is the author and illustrator of The Village of Round and Square Houses and Darkness and the Butterfly. As an illustrator, she has collaborated on with many writers on picture books, including six Everett Anderson titles.

“A simple, poetic telling of Everett Anderson's feelings as he copes with and accepts the fact of his father's death.” —Childhood Education

“The poetry expresses simply but powerfully Everett's emotions, as well as his mother's quiet, understanding support....Grifalconi's superb drawings convey as much meaning as Clifton's empathetic lines in a book that is aesthetically satisfying and an effective way of helping children come to terms with loss.” —Publishers Weekly

“Simple in concept yet universal in need; one must share this book quietly within and with others.” —Language Arts