Shame on Me: An Anatomy of Race and Belonging (Paperback) 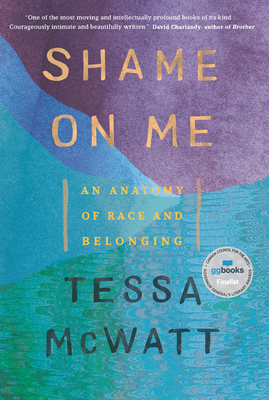 FINALIST FOR THE GOVERNOR GENERAL'S AWARD FOR NON-FICTION

Interrogating our ideas of race through the lens of her own multi-racial identity, critically acclaimed novelist Tessa McWatt turns her eye on herself, her body and this world in a powerful new work of non-fiction.

Tessa McWatt has been called Susie Wong, Pocahontas and "black bitch," and has been judged not black enough by people who assume she straightens her hair. Now, through a close examination of her own body--nose, lips, hair, skin, eyes, ass, bones and blood--which holds up a mirror to the way culture reads all bodies, she asks why we persist in thinking in terms of race today when racism is killing us.
Her grandmother's family fled southern China for British Guiana after her great uncle was shot in his own dentist's chair during the First Sino-Japanese War. McWatt is made of this woman and more: those who arrived in British Guiana from India as indentured labour and those who were brought from Africa as cargo to work on the sugar plantations; colonists and those whom colonialism displaced. How do you tick a box on a census form or job application when your ancestry is Scottish, English, French, Portuguese, Indian, Amerindian, African and Chinese? How do you finally answer a question first posed to you in grade school: "What are you?" And where do you find a sense of belonging in a supposedly "post-racial" world where shadism, fear of blackness, identity politics and call-out culture vie with each other noisily, relentlessly and still lethally?
Shame on Me is a personal and powerful exploration of history and identity, colour and desire from a writer who, having been plagued with confusion about her race all her life, has at last found kinship and solidarity in story.

TESSA MCWATT is the author of six novels and two books for young people. Her fiction has been nominated for the Governor General's Award, the City of Toronto Book Awards, and the OCM Bocas Prize. She is the co-editor, along with Dionne Brand and Rabindranath Maharaj, of Luminous Ink: Writers on Writing in Canada. Her first picture book for children, Where Are You Agnes?, is based on the life of abstract expressionist painter Agnes Martin. She is one of the winners of the Eccles British Library Award 2018, for her memoir: Shame on Me: An Anatomy of Race and Belonging, which also won the Bocas Prize for Non-Fiction 2020 and was a finalist for the Hilary Weston Writer's Trust Prize for Nonfiction, as well as for the Governor General's Award. She is also a librettist, most recently working with British composer Hannah Kendall. Their chamber opera, The Knife of Dawn, premiered at the Roundhouse, London, in 2016, and they are working on a new full-length opera. McWatt is also in the process of bringing John Berger's novel To the Wedding, to the screen, with award winning film director Andrea Pallaoro. Tessa McWatt is a Professor of Creative Writing at the University of East Anglia and is on the Board of Trustees at Wasafiri. She lives in London.

“This remarkable meditation on beautiful, human bodies formed by the violence of slavery and by colonial shame resists categorisation, even as it shows up the ways in which categories of race and identity are no more than empty methods of social control. Reading this book I felt a profound sense of relief: that someone as wise as Tessa McWatt had the compassion and courage to write it. A deeply moving, urgent and important book.” —Preti Taneja, author of We That Are Young

“Heart-stopping and wise, exquisitely written, compellingly told, Shame On Me rises to a crescendo of such beauty and grace in its final chapter—a call to activism and resistance—that it left me breathless with the intensity of my own listening.” —Rebecca Stott, author of In the Days of Rain

“There have been many books about race and identity in recent years, but none quite like this one—part memoir, part essay, and partly a challenge to think beyond the current parameters of ‘identity.’ Told from the perspective of a writer whose own inheritance confounds established identities at every turn, it is a perceptive, poignant and deeply profound meditation on how the race-thinking of the plantation continues to structure our sense of ourselves.” —Anshuman Mondal, professor of Modern Literature at University of East Anglia

“Poignant, provocative, beautifully written, Tessa McWatt’s memoir, Shame on Me, is an important, original and deeply thoughtful book. McWatt asks the toughest, most searching of questions about race and belonging and offers answers that surprise and challenge us. I loved it.” —Jill Dawson, author of The Language of Birds

“A brave indictment, both passionate and reflective, of the category of race and the prison that identity can become.” —Lisa Appignanesi, author of Mad, Bad, Sad, Women and the Mind Doctors

“Shame on Me is one of the most moving and intellectually profound books of its kind. As an ‘anatomy,’ it operates with surgical precision upon the necrotic legacies of race, affirming kinship and solidarity against the ongoing violence of silence and denigration. Courageously intimate and beautifully written, it is everything I admire in Tessa McWatt.” —David Chariandy, award-winning author of Brother