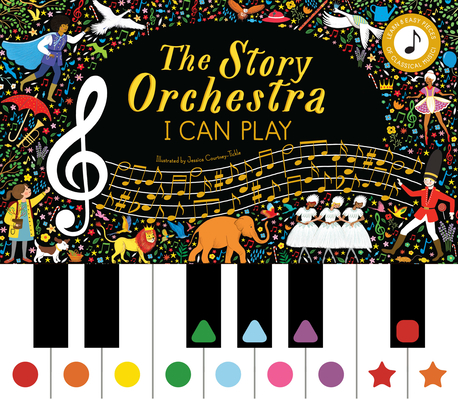 This is book number 7 in the The Story Orchestra series.

From the The Story Orchestra series, a beautifully illustrated first piano sound book! Press the keys to learn 8 famous classical tunes from the story books.

Even the youngest child can learn to play music with this simple method. Color and shape codes correspond to the 14 keys, so kids can learn easy 8-bar, one-finger melodies. Each song includes an enchanting illustration and description of the part of the story that the music is telling along with playing tips. All the favorite characters from the series are there to encourage young musicians as they play their first notes with the sound of a piano.

I Can Play: Readers should press firmly on the pages to activate the keys, encouraging them to explore the possibilities of making music!

Also available from the Story Orchestra series:The Magic Flute, Carnival of the Animals, Swan Lake, The Sleeping Beauty, The Nutcracker, and Four Seasons in One Day.

The perfect first keyboard to introduce children to classical music.

Jessica Courtney Tickle​ is an illustrator who graduated from Kingston University in July 2014. Her absolute favorite thing to draw or paint is nature, finding a focus on foliage of any kind as well as children's stories about adventure and exploration. She also has a penchant for drawing theater from music makers to dancers and even singing animals. Jessica is most influenced by vintage picture books, travel posters, and folk art as well as numerous painters and printmakers.

Katy Flint is a children'sbook author and editor, based in London.She is the author of the best-selling sound book The Story Orchestra: The Nutcracker,and has worked on many other non-fiction titles – from books on human bodies to dinosaurs. She likes playing the violin and dog-spotting.

Rowan Baker graduated with distinction from the Royal College of Music in conducting. He has since worked as an arranger, transcriber, and copyist for the London Festival Opera and as music manager for Andrew Lloyd Webber's Really Useful Group.