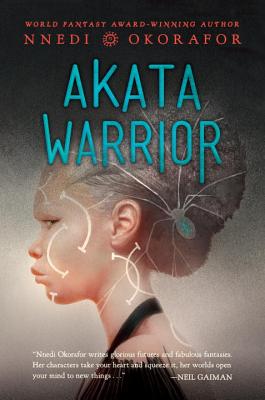 
Other Books in Series

This is book number 2 in the The Nsibidi Scripts series.

The newest novel by the author of Akata Witch and the forthcoming Marvel comic book series about Shuri, Black Panther's sister!

A year ago, Sunny Nwazue, an American-born girl Nigerian girl, was inducted into the secret Leopard Society. As she began to develop her magical powers, Sunny learned that she had been chosen to lead a dangerous mission to avert an apocalypse, brought about by the terrifying masquerade, Ekwensu. Now, stronger, feistier, and a bit older, Sunny is studying with her mentor Sugar Cream and struggling to unlock the secrets in her strange Nsibidi book.

Eventually, Sunny knows she must confront her destiny. With the support of her Leopard Society friends, Orlu, Chichi, and Sasha, and of her spirit face, Anyanwu, she will travel through worlds both visible and invisible to the mysteries town of Osisi, where she will fight a climactic battle to save humanity.

Nnedi Okorafor is a novelist of African-based science fiction, fantasy, and magical realism for both children and adults. Born in the United States to Nigerian immigrant parents, Nnedi is known for weaving African culture into creative evocative settings and memorable characters. In a profile of Nnedi’s work, the New York Times called Nnedi’s imagination “stunning.” Nnedi has received the World Fantasy Award, the Hugo Award, and the Nebula Award, among others, for her novels. Her fans include Rick Riordan, John Green, Laurie Halse Anderson, and Ursula K. Le Guin among others.

Nnedi Okorafor holds a PhD in English and is a professor at SUNY Buffalo. She divides her time between Buffalo and the suburbs of Chicago, where she lives with her daughter. Learn more at nnedi.com or follow her on Twitter @nnedi.

★ "Okorafor’s novel will ensnare readers and keep them turning pages until the very end to see if and how Sunny fulfills the tremendous destiny that awaits her." —Booklist, starred review

★ "Akata Warrior swiftly synthesizes the lessons and knowledge of the first book into a heart-racing story of resilience and a determination to save the world. This title is a unique coming of age story, coupling the distinct experience of the cultural duality as both African and African-American with lessons of love, loyalty, and the pains of adolescent insecurities." —BCCB, starred review

"The narrative is well paced and multifaceted, taking the reader on a tour of both modern Nigeria and the mystical worlds of the Wilderness (sometimes simultaneously). Along the way, the reader is given a fascinating glimpse into Nigerian culture."  —VOYA

"There’s more imagination on a page of Nnedi Okorafor’s work than in whole volumes of ordinary fantasy epics." —Ursula K. Le Guin, award-winning author of A Wizard of Earthsea

"I always loved science fiction, but I didn’t feel I was part of it—until I read first Octavia Butler, and now Nnedi Okorafor." —Whoopi Goldberg

"The voice of Nnedi Okorafor does not obey the rules of distance, time, or place. Hers is the voice that fuses matter and imagination. She shows us just how close we are to that alternate reality." —Tchidi Chikere, Nigerian award-winning film director and screenwriter