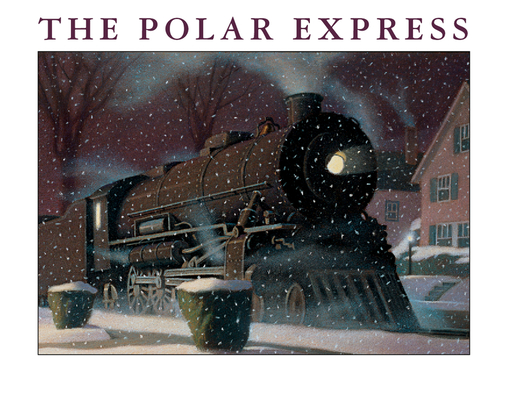 This oversize edition of the Caldecott Medal-winning classic The Polar Express is perfect for sharing and reading aloud.

A young boy, lying awake one Christmas Eve, is welcomed aboard a magical train to the North Pole . . .

Through dark forests, over tall mountains, and across a barren desert of ice, the Polar Express makes its way to the huge city standing alone at the top of the world, where the boy will make his Christmas wish.

For millions of readers around the world, this mysterious journey to the North Pole has become a beloved Christmas classic.

The Polar Express is a Caldecott Medal winner, and reading the story together is a beloved holiday tradition held by generations of families. It has also become a favorite holiday movie and been translated into stage productions that take place across the United States during the holiday season.

Chris Van Allsburg is one of America’s most innovative picture book creators. He is perhaps best known for the contemporary classic The Polar Express, which received the Caldecott Medal in 1985 and was made into a blockbuster movie starring Tom Hanks. He also received the Caldecott Medal for Jumanji, which was made into a popular feature film in 1996 and again in 2017. He also received a Caldecott Honor for his very first book, The Garden of Abdul Gasazi. He has received the Regina Medal for lifetime achievement in children’s literature, a National Book Award, and a Society of Illustrators Lifetime Achievement Award, among other honors. He lives outside of Boston, Massachusetts. Visit him at chrisvanallsburg.com.

"Even the most hardened Santa doubters might find in The Polar Express the faith to believe again." American Bookseller

"As always, the forms are sculptured, the perspectives as dazzling as they are audacious, the colors rich and elegant, the use of light and shadow masterly." Horn Book Guide

"The Polar Express is magic indeed." The New York Times

"The sumptuous pastel effects-train lights seen through falling snow and a vertiginous overhead view, from Santa's sleigh, of his popular city-make this one of Van Allsburg's most treasured visions." Newsweek

"One couldn't select a more delightful and exciting premise for a children's book than the tale of a young boy lying awake on Christmas Eve only to have Santa Claus sweep by and take him on a trip with other children to the North Pole. And one couldn't ask for a more talented artist and writer to tell the story than Chris Van Allsburg. Van Allsburg, a sculptor who entered the genre nonchalantly when he created a children's book as a diversion from his sculpting, won the 1986 Caldecott Medal for this book, one of several award winners he's produced. The Polar Express rings with vitality and wonder." Amazon.com —