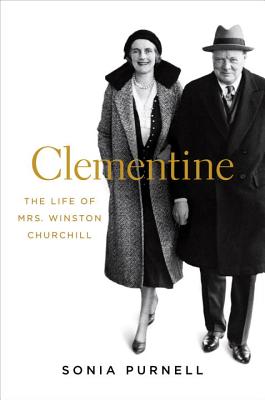 A long over-due tribute to the extraordinary woman who was Winston Churchill's closest confident, fiercest critic and shrewdest advisor that captures the intimate dynamic of one of history's most fateful marriages, as seen on The Crown and Darkest Hour--"Engrossing...the first formal biography of a woman who has heretofore been relegated to the sidelines." -The New York Times

Late in life, Winston Churchill claimed that victory in the Second World War would have been "impossible" without the woman who stood by his side for fifty-seven turbulent years. Why, then, do we know so little about her? In this landmark biography, a finalist for the Plutarch prize, Sonia Purnell finally gives Clementine Churchill her due. Born into impecunious aristocracy, the young Clementine Hozier was the target of cruel snobbery. Many wondered why Winston married her, when the prime minister's daughter was desperate for his attention. Yet their marriage proved to be an exceptional partnership. "You know,"Winston confided to FDR, "I tell Clemmie everything." Through the ups and downs of his tumultuous career, in the tense days when he stood against Chamberlain and the many months when he helped inspire his fellow countrymen and women to keep strong and carry on, Clementine made her husband's career her mission, at the expense of her family, her health and, fatefully, of her children. Any real consideration of Winston Churchill is incomplete without an understanding of their relationship. Clementine is both the first real biography of this remarkable woman and a fascinating look inside their private world. "Sonia Purnell has at long last given Clementine Churchill the biography she deserves. Sensitive yet clear-eyed, Clementine tells the fascinating story of a complex woman struggling to maintain her own identity while serving as the conscience and principal adviser to one of the most important figures in history. I was enthralled all the way through." -Lynn Olson, bestselling author of Citizens of London

Sonia Purnell is a biographer and journalist who has worked at The Economist, The Telegraph, and Sunday Times. Her first book, Just Boris, a candid portrait of London mayor and Brexit champion Boris Johnson, was longlisted for the Orwell prize. Clementine, published as First Lady: The Life and Wars of Clementine Churchill in the UK, was chosen as a Book of the Year by The Telegraph and Independent and was shortlisted for the Plutarch Award. Residence: London, UK Social: Twitter: SoniaPurnell